Dan O’Connor play-by-play broadcaster for the Vancouver Giants in the WHL. 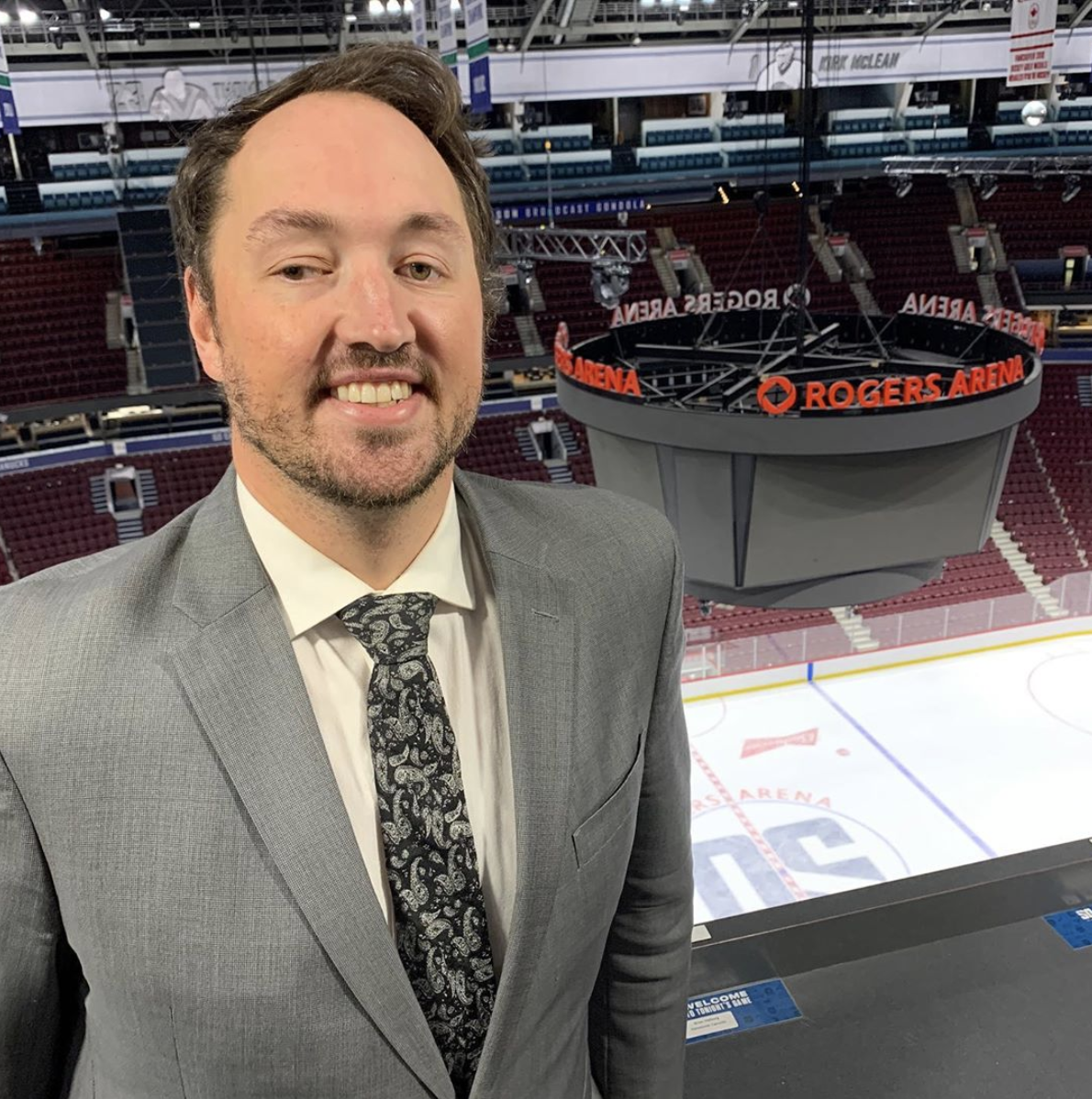 Meet Dan O’Connor. The voice behind the Vancouver Giants of the Western Hockey League.

This play-by-play announcer dreamed about calling games from when he was a young child. From pretending to call games, yelling at his home television to voicing one of the biggest teams in the WHL, Dan’s journey has come full circle.

Dan’s story is one that took him from B.C. to the prairies and back, with many rejections along the way. His genetic eye disorder has never stopped him from being the eyes of thousands tuning in to experience the game on the ice.

His story is proof that if anyone works hard enough and is willing to take a leap of faith (or many), they can achieve their wildest dreams.

“Doing what I am right now was always the plan. Was always the goal.” – Dan O’Connor, Vancouver Giants’ broadcaster

Dan as a child with his father Martin O’Connor 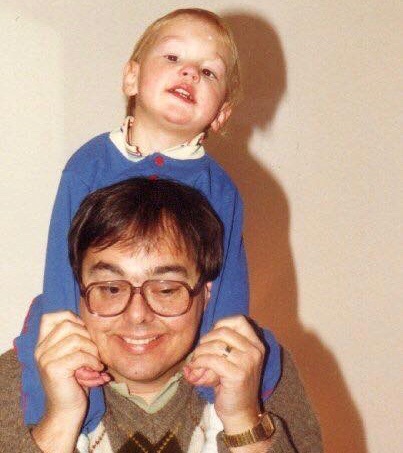 Dan O’Connor caught the hockey bug at a young age.

O’Connor’s love for hockey only grew as he got older.

“I was probably the only six or seven year-old who could name all the 1983/84 Edmonton Oilers,“ he said with a laugh.

Dan said it got to the point where he could comfortably mute the TV and call the NHL games with ease, always knowing exactly who was on the ice. Sometimes he would do it by himself, while other times he would provide the commentary when a group of his parent’s friends would come over to watch the games.

“We would traditionally always watch Hockey Night in Canada on CBC, and he would mute the sound and practice doing the play-by-play while watching the TV,” said his father, Martin.

“That was really incredible, and we got quite a few compliments from people who remarked how good he was.”

According to Dan, he thought of his unique talent as more of a “party trick” than anything. It was just something that came easy to him.

After graduating high school, Dan decided he wanted to try and turn his gift into a career. He toyed around with a few options, and eventually decided to take his first year of post-secondary education at Kwantlen Polytechnic University.

“I really wanted to go to BCIT,” said Dan.

“I wanted to go into broadcasting, and through the research I had done, BCIT was the way to go.”

Dan O’Connor posing for his Delta hockey team photo as a teen. 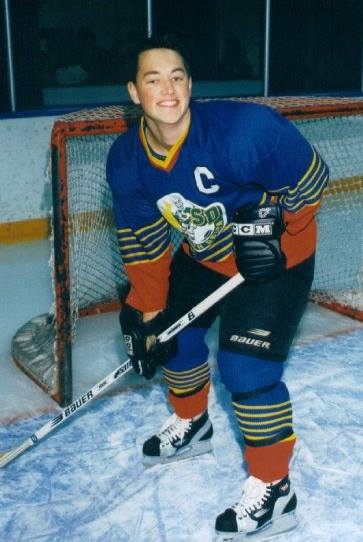 Dan as a teen with his dad, sporting Miami Heat jerseys 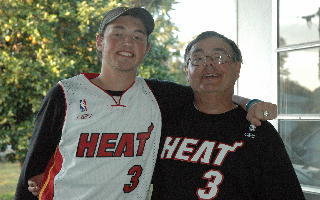 “I hope people see me as an inspiration, but really I’m just me.”

Dan O’Connor as a young adult, ab out to start his broadcasting career 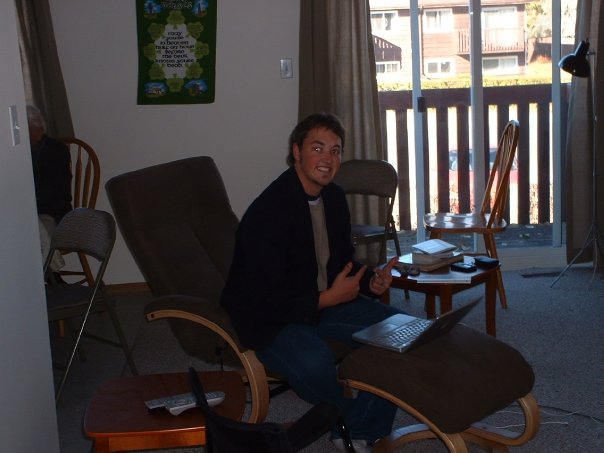 Dan eventually decided to apply to BCIT’s broadcast and online journalism program, but admits he didn’t take the rigorous application process all that seriously. At the time, BCIT had a multi-step application process, which included a current events test, which if passed, led to an interview, which then led to the third phase of the application.

“I kind of thought if I can kind of fake my way through a current events test, then I’ll be okay,” said Dan.

Dan didn’t even get a call for the second step, the interview.

This was his wake-up call.

After being rejected by BCIT, Dan finished his second year at Kwantlen. He then applied to the broadcast program at Columbia College, where he “learned a lot” in his short time there.

After graduation, a job opening came up in Fort St. John at a radio station called Moose FM, to do production and call Junior ‘B’ hockey for the Fort St. John Huskies and host an afternoon show. Dan jumped at the opportunity, and quickly applied and interviewed over the phone.

But he didn’t get the job.

As Dan puts it,

A young man named Ryan Pinder, who now works for Sportsnet in Calgary got the job in Fort St. John.

“I remember being a bit dejected about it,” said Dan.

“I really had it in my mind that I was going to go to Fort St. John and go to northern B.C. to start my career.”

Two days later, after that interview, another job posting came up for a radio station called Peace FM in Chetwynd B.C., a town of 2800 people, about an hour west of Dawson Creek.

“I had never heard of Chetwynd B.C. I had no idea what Chetwynd even was,” said Dan.

The job posting was to do a mid-morning music show from 9 a.m. to 12 p.m., commercial production and play-by-play for the Dawson Creek Junior Canucks in the Northwest Junior Hockey League.

Dan called the number on the job posting, and a man named Leo Cybulski answered.

Leo, who passed away in 2019, was described by Dan as a larger-than-life character. He was the fire chief in Chetwynd, a school counsellor and independently owned and operated a small community radio station.

“He offered me the job over the phone, then it was ‘okay mom, okay dad, I’m moving to Chetwynd.’”

“Next thing you know, two weeks later, we’re packing a U-Haul, loading my car up and my dad and I are driving ten hours north.”

And Dan launched his life in the broadcast businesses.

Dan O’Connor and Bill Wilms, the colour commentator for the Vancouver Giants 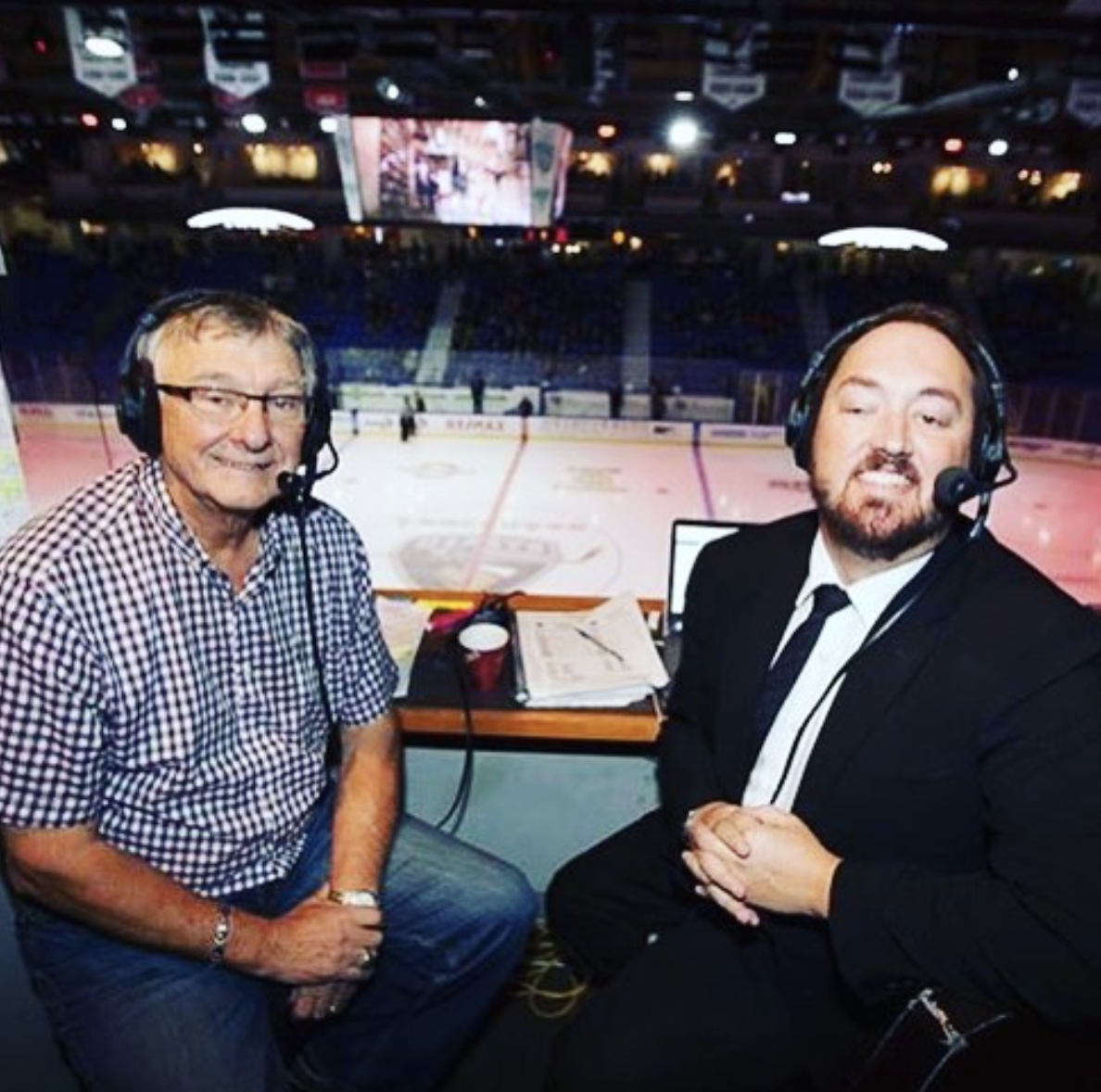 A day in the work life of Dan O’Connor: February 28, Giants vs. Royals

Friday is the first of a triple header with the Vancouver Giant’s B.C. division rivals, the Victoria Royals.

For Dan, game day preparations begin as soon as he gets to the Langley Events Centre. Before every game O’Connor pours over statistics and prepares his notes for the night’s broadcast.

Dan’s love for everything hockey has led him down the path to broadcasting greatness. It’s something Dan’s childhood friend Daniel Patching always knew his buddy was destined for.

“His ability to just take information and knowledge and just hold onto it and be able to spit it out at any moment in time was always amazing,” said Patching.

After getting his notes and game day program in order, it’s time for Dan to set up to the broadcast booth for the evening.

Dan writing up the pre-game stats for the night 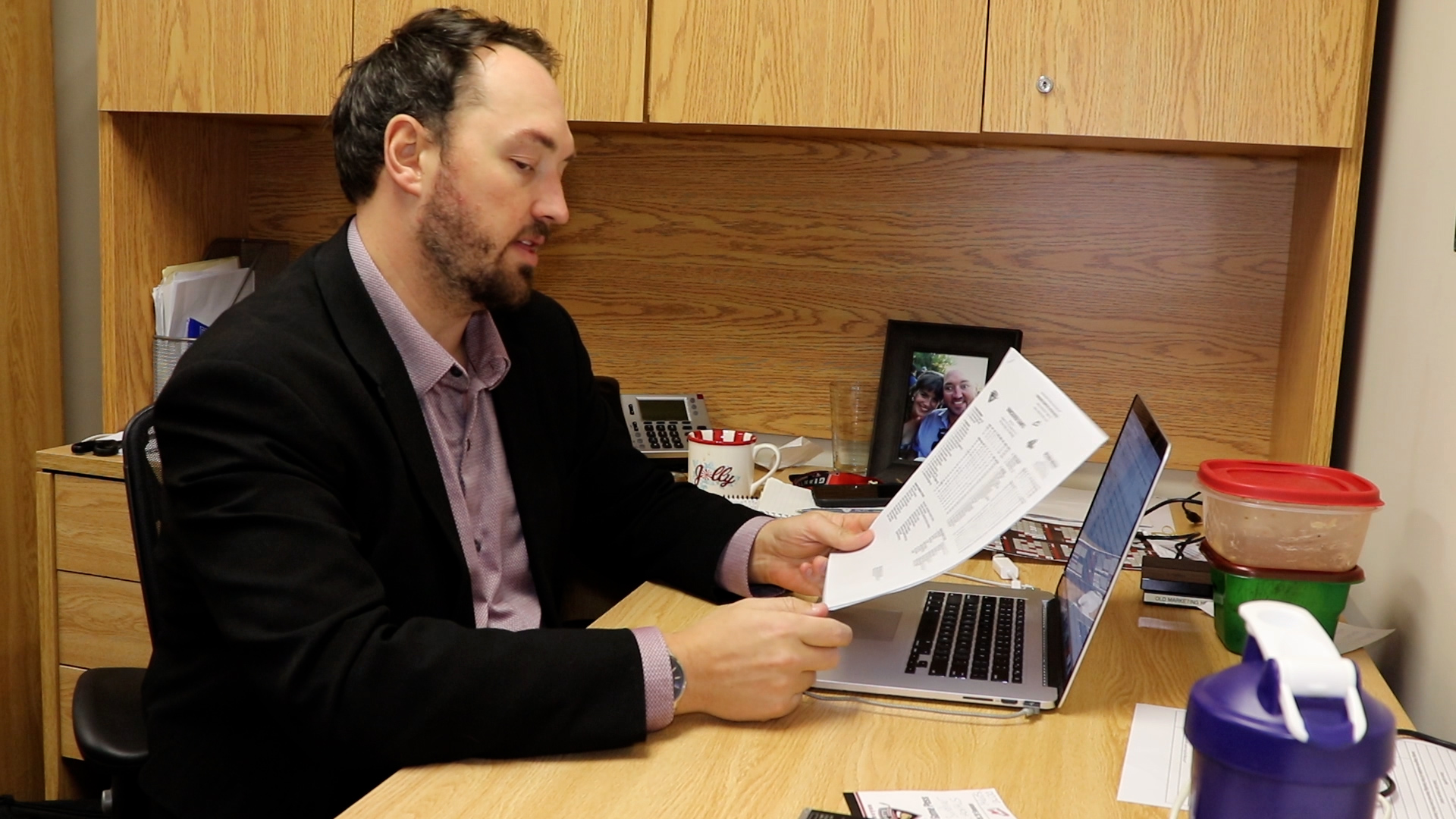 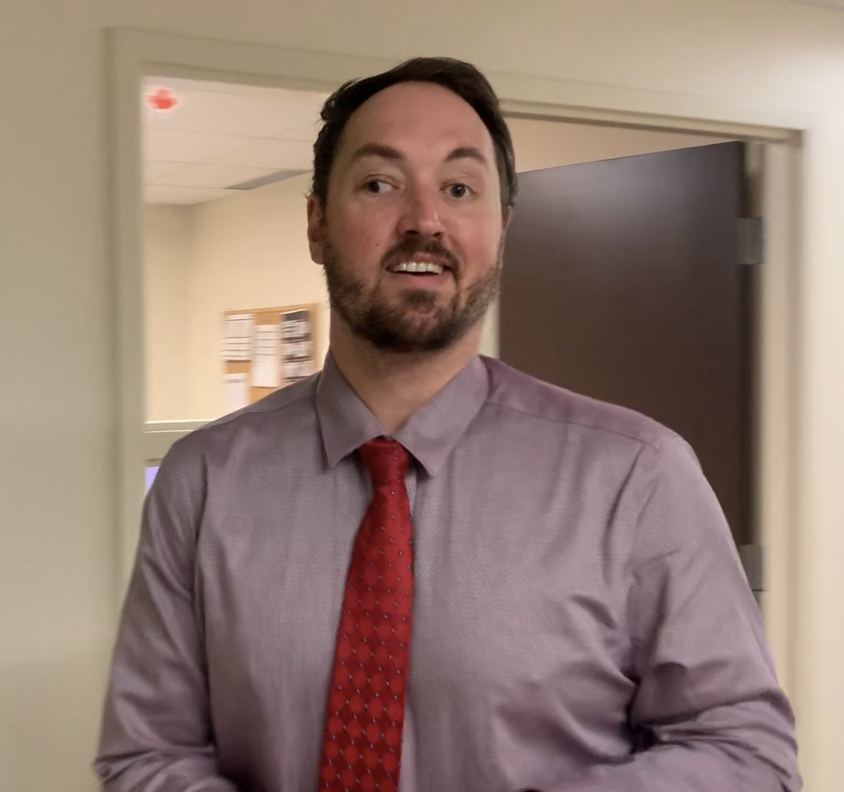 All the prep work that goes into the broadcast is what’s required of most minor league play by play announcers.

Giant’s Senior Vice President Dale Saip has seen many broadcasters come and go in his time with teams around the league. But Saip says that calling the night’s came is just the tip of the iceberg.

“That’s the gravy in the job. You like doing that? You like being a part of the game? Well you got to do all the other stuff to be able to do the broadcast. The meat and potatoes of this is the grunt work behind it.” -Dale Saip, Vancouver Giants Senior Vice President

When the grunt work is finished, it’s time to head down to the locker room and interview the players about the night ahead. Everything builds up to the pregame show, the dry run of the night’s broadcast.

Before O’Connor’s voice hits the airwaves, there’s some time for a quick bite to eat, then it’s back up to the broadcast booth for the call.

The night is a good one for Vancouver. The Giants down the Royals 3-0.

Even as the players skate off the ice, Dan’s job is not done. There’s the postgame show, player interviews and teardown.

As the LEC sits empty, Dan types the last words of his game recap, closes his laptop, and sets off for home, with another night of hockey in the books.

Dan O’Connor interviewing the night’s stars after the game 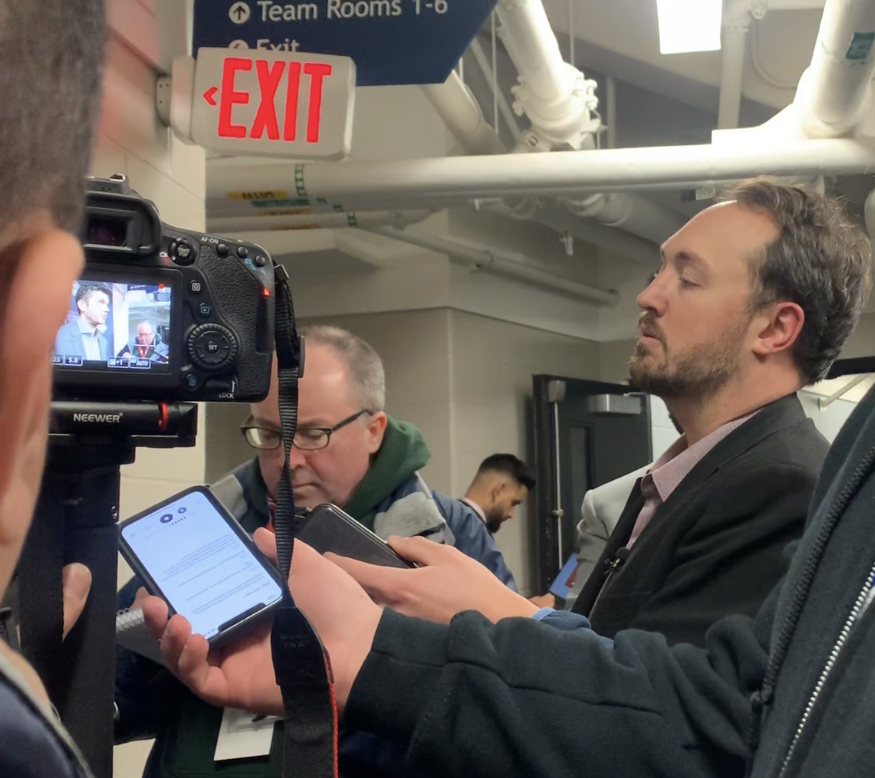 The Suitcase Project- Unpacking Riverview’s History and how it could impact...