Thousands of crows flock to Burnaby’s Still Creek area to roost, something that is not always welcomed by residents and business owners. Crow-lovers June Hunter and John Merrett hope they can inspire others to respect the crows and their habitats, in order to peacefully coexist.

They might be in luck, as Ornithologist George Clulow states, the Burnaby crows aren’t going anywhere. 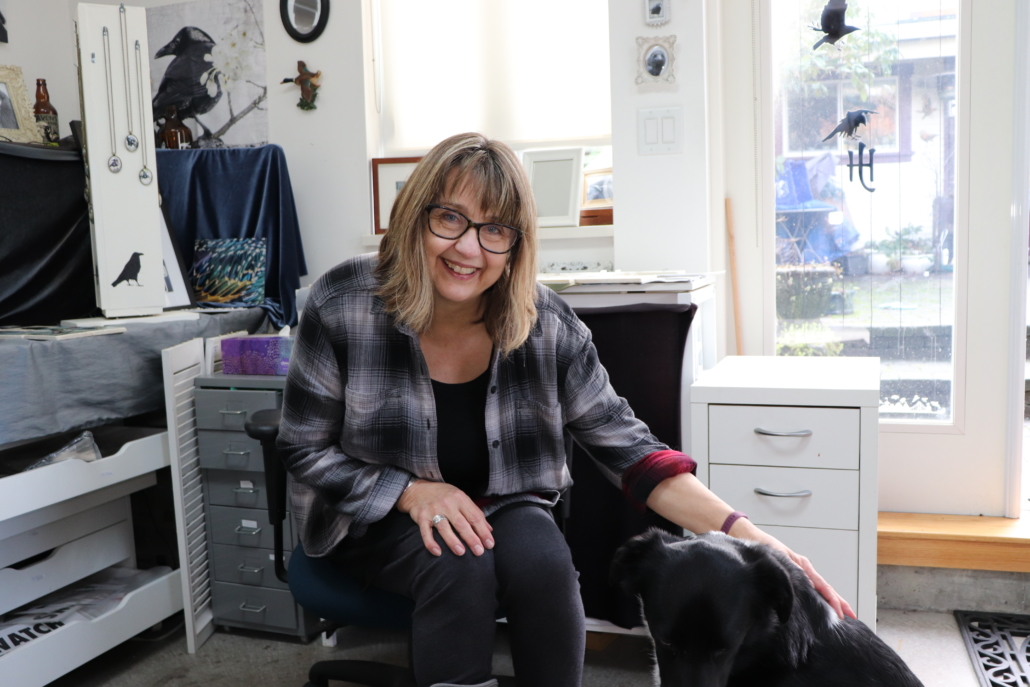 In an East Vancouver backyard, one woman strives to end the negative stigma associated with crows.

June Hunter is an artist. More specifically she’s an artist who specializes in crows.

In her studio June creates all matter of crow related art, ranging from bags and pillows to pins and trinkets.

Each item has the distinct black bird front and centre.

“I have a hashtag “crow therapy”. I’ve written blog posts about it, just because of the different ways I find crows to be therapeutic.” – June Hunter, artist

Crows are often seen as a nuisance. June finds this to be the exact opposite of her experiences with the bird.

“[It’s] their attitude. They’re confident but at the same time sensible. The other thing that you can see in their eyes is a constant risk benefit analysis, like they’re doing calculations all the time.” – June Hunter, artist

Crows are especially prevalent in Burnaby. According to the annual Christmas Bird Count, there are over 14,000 crows in the Still Creek area.

Through attempts to displace and disperse them, crows have maintained their presence near and around Still Creek.

Some of June’s crow based art work on display. 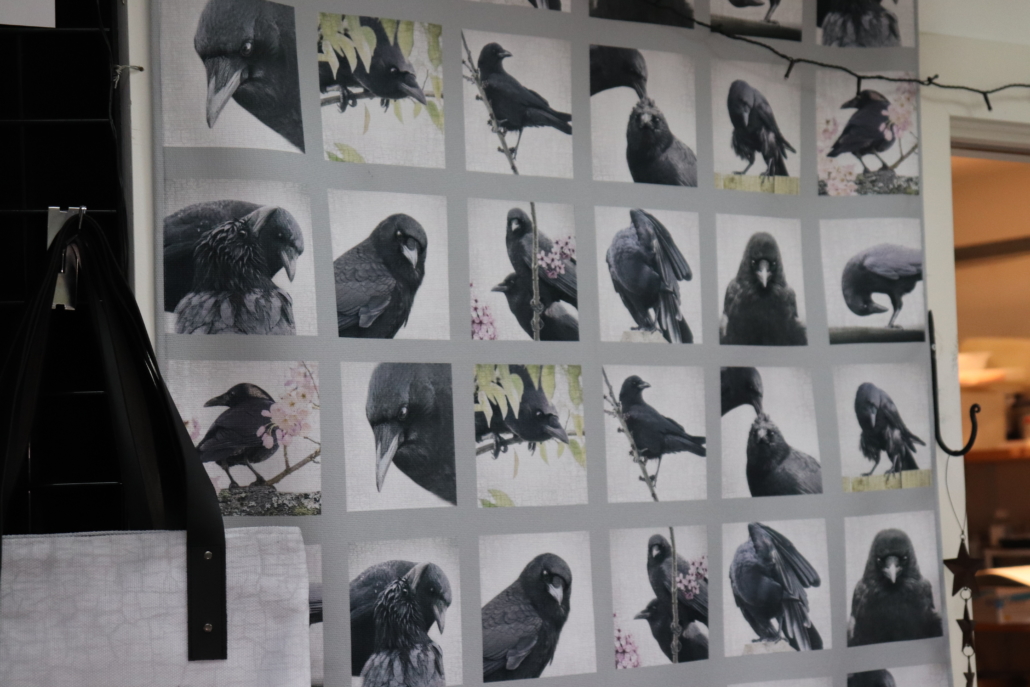 John Merrett is the former owners of Wicks and Wax, a Burnaby based wax and candle maker.

Merrett attended BCIT in the mid 60’s, when the school was the only building in the area.

“…there were fields that were across Canada Way and the highway, and there was swamp land basically with trees in them. Over the years businesses have moved in and built huge warehouses and things.” -John Merrett, Wicks and Wax

With development encroaching on crow territory, John is a firm believer that businesses should co-exist with the birds rather than chase them away.

Former Wicks & Wax owner John Merrett gets a handful of food ready for some crows. 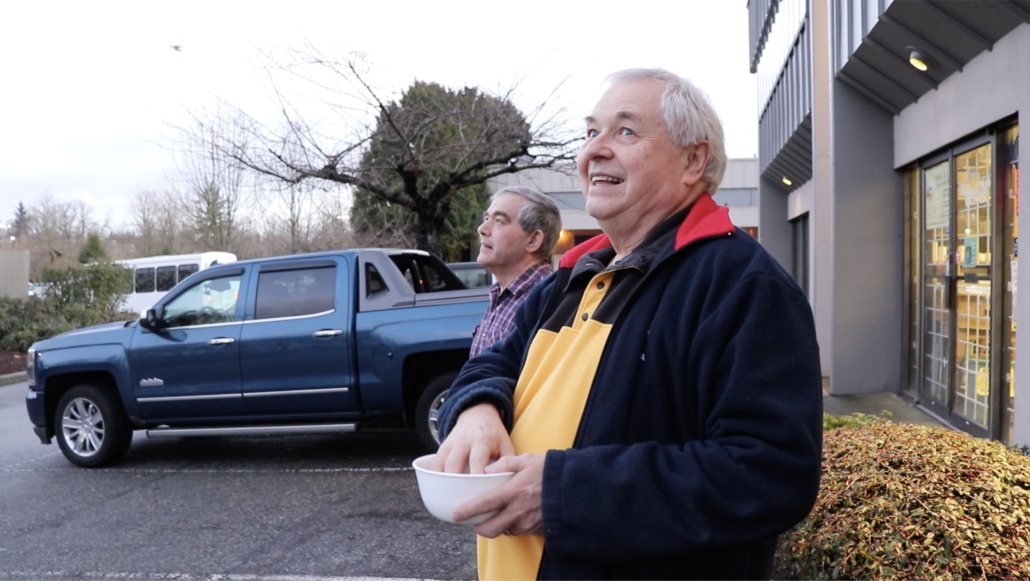 Crows gather in the snow behind Wicks & Wax. 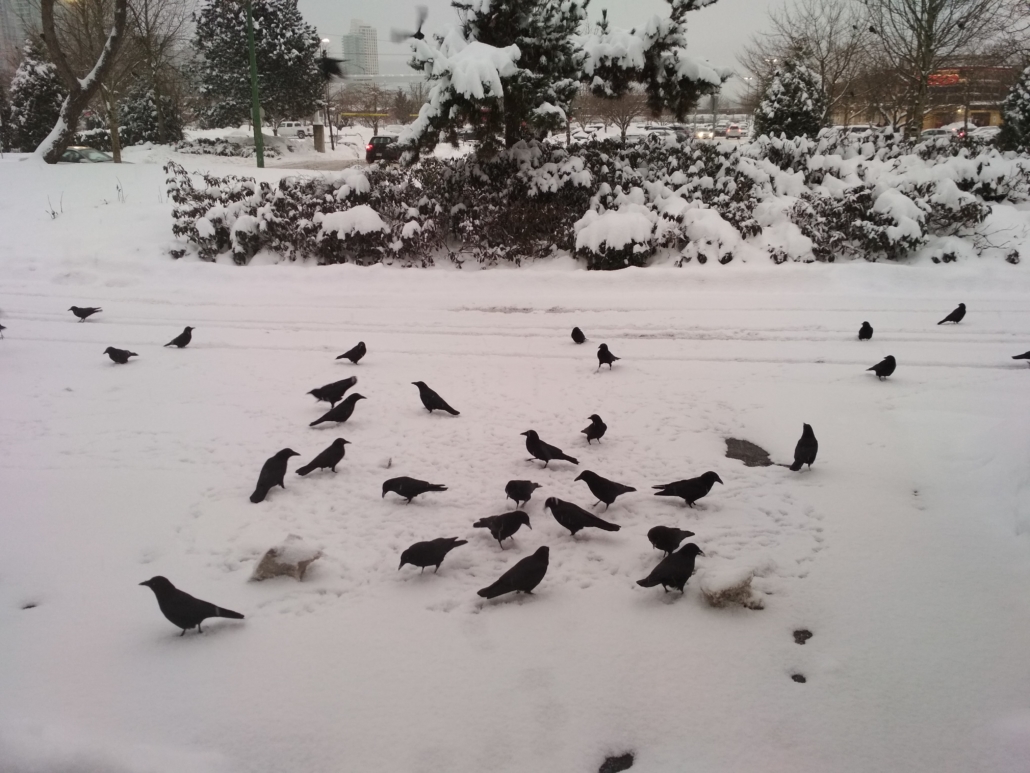 The wax warehouse has become a social centre for local crows to gather.

The birds around Wicks and Wax have grown accustom to John’s daily feedings, and have built up a rapport with the boss.

“I go out there in the afternoon, not every day but quite often and give them some food. The average crow has to eat 11 oz of food a day to survive…The minute I come out, it all goes quiet.” – John Merrett

As for other businesses who don’t enjoy crow activity, Merrett adds that they’re in the crow’s territory. So, “expect it.” 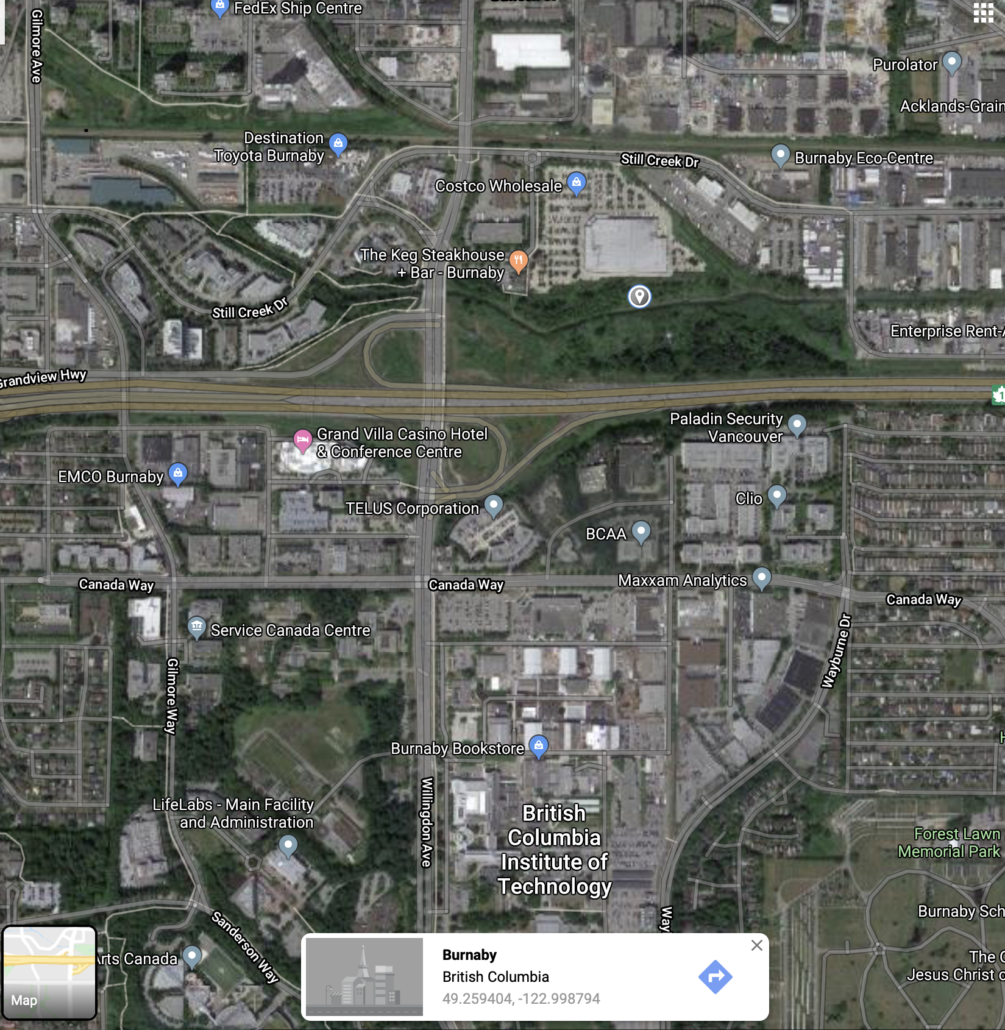 This is one of the few areas near Still Creek that has relatively heavy vegetation.

The McDonalds parking lot on Still Creek drive is often filled at night with crows.

Coscto is alleged to have a sound device to replicate crow distress calls in an effort to dissuade the birds from perching on their building.

The car dealerships built 15 years ago sit on former nesting grounds for crows.

Still Creek provides crows with the necessary area to roost and nest.

The creek flows into Burnaby Lake, carving its way through large tracts of industrial land.

With constant development in the latter half of the 20thcentury, the local crow population shifted with the development.

According to George Clulow, former president of the B.C. Field Ornithologists, the birds were temporarily ousted from their nesting grounds with the construction of several car dealerships and offices on Still Creek Drive.

George Clulow is an avid bird watcher and former president of the B.C. Field Ornithologists. 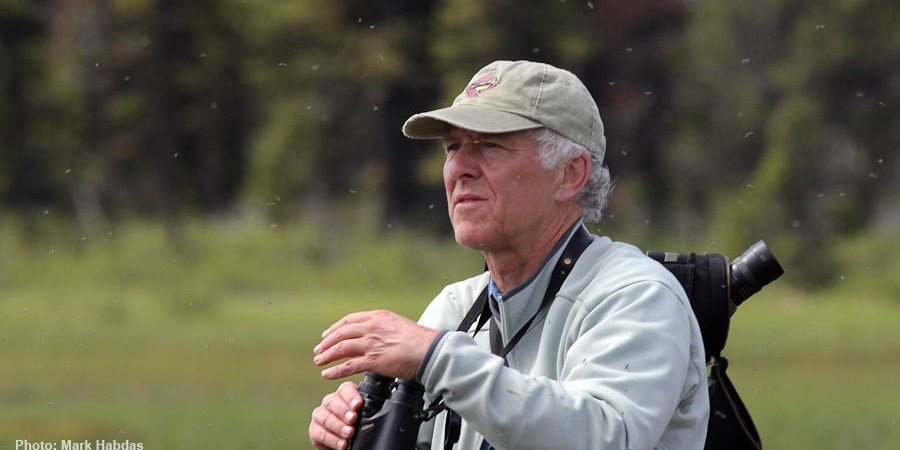 A crow sits perched in a tree near McDonalds on Still Creek Dr. 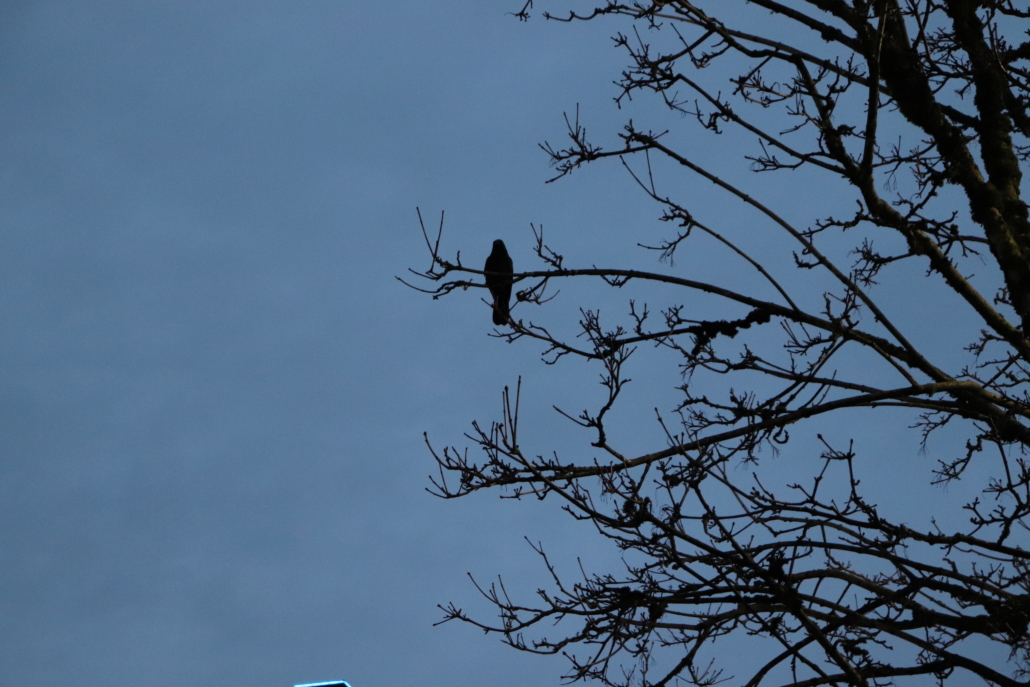 Subsequently those businesses started employing methods to keep the crows away, which the crows soon adapted to.

“What they’ve realized is the disturbance maybe works for a bit…until the crows get habituated to it and then they totally ignore it.” -George Clulow, former BCFO president.

The resilience of crows means that even after a recent dip in population, their numbers are now back on the rise.

Clulow attributes the population spike to a stagnation in development around Still Creek.

“With the lack of harassment, the numbers attending the that roost seem to be increasing…it seems to be corelated with a settling down and a lack of development.” – George Clulow

Certain areas of the creek are still greenspace. Walking paths line the length of the creek, and the remaining trees provide a home for the birds.

Crows are also utilizing their urban settings as perches for roosting. Lamps, buildings and street trees are all becoming gathering places.

“They’re a pretty well urban adapted species. They live on sort of the margins and leftovers of whatever humans leave on the landscape.” – George Clulow

Clulow’s view is that unless all vegetation is removed from the area, Burnaby’s crows will continue to adapt and be a unique part of life in the city.

Crows take over a tree at BCIT’s Burnaby campus. 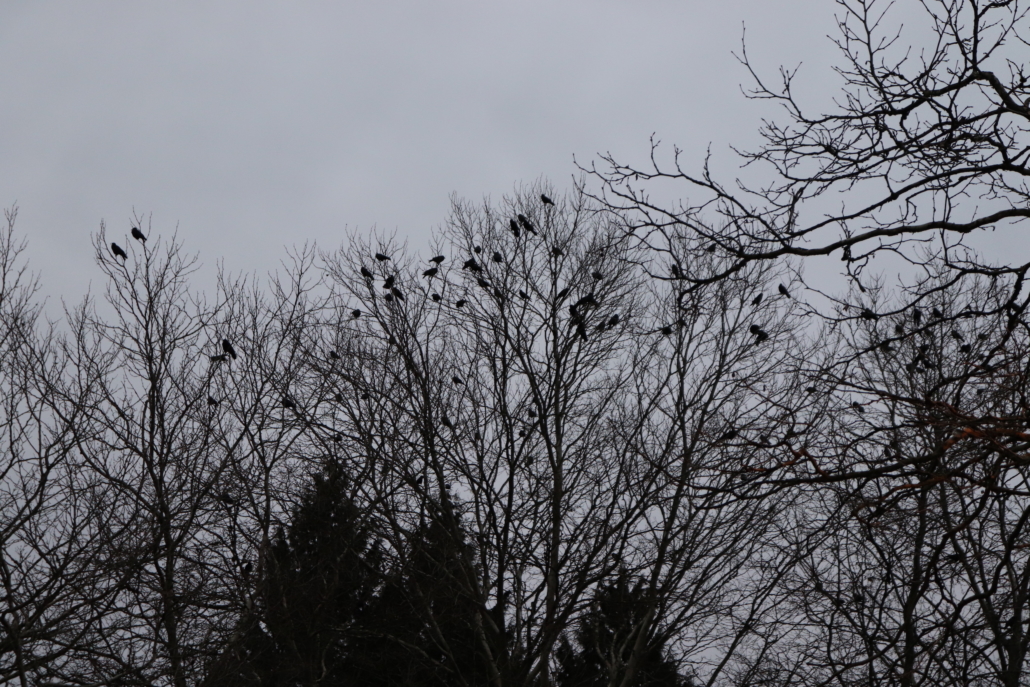 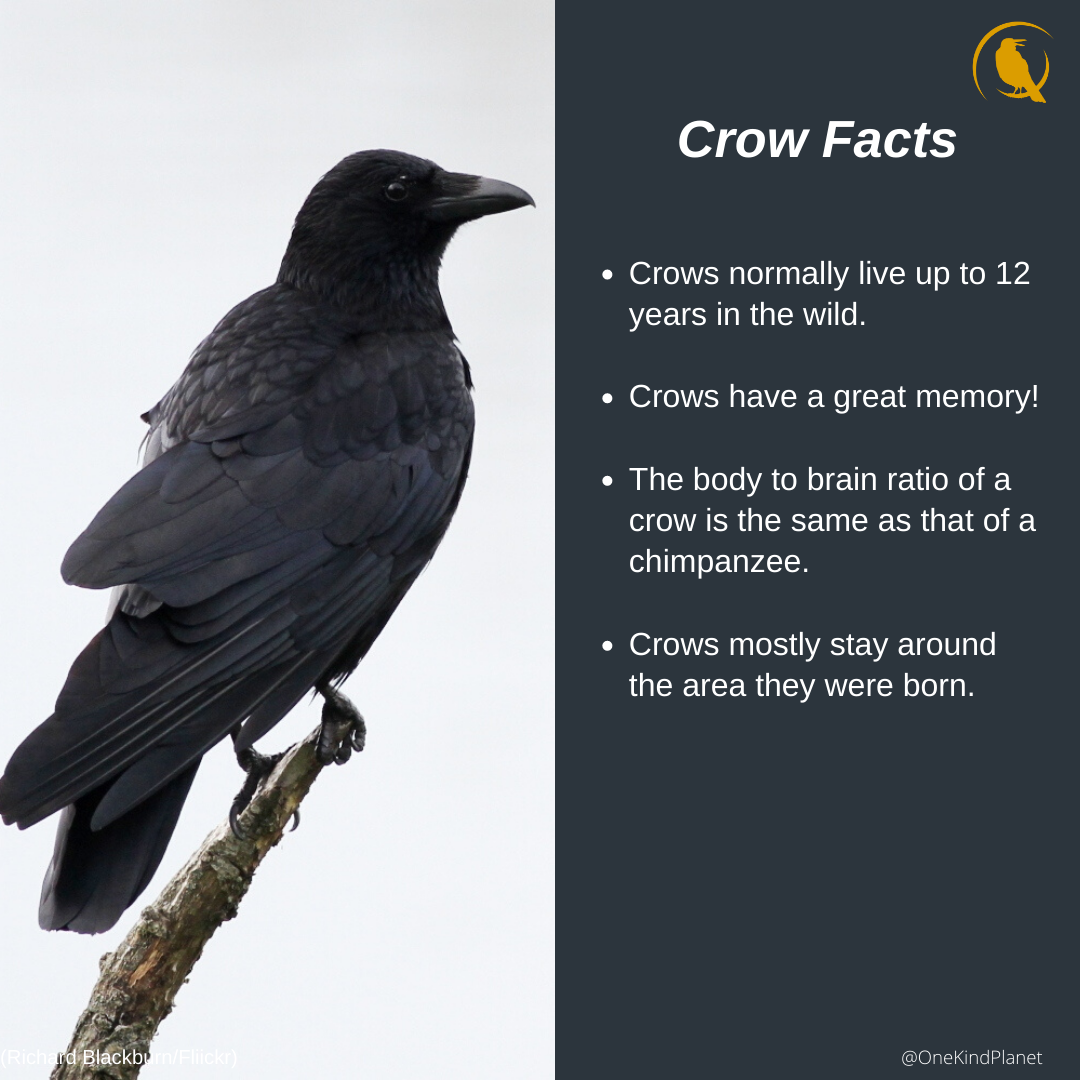 Without much knowledge on crows, one could simply assume they’re just another bird. On the contrary, crows are extremely smart. Some exhibit near human qualities while existing in a parallel universe to ours.

The world’s oldest crow, Tata, lived to be 59 years old. He spent his entire life in captivity after falling out of his nest, which left him unable to fly. The oldest crow in the wild lived to be 30.

It’s said that crows can tell the difference between humans. More importantly, they remember who was mean to them. So be on your best behavior when it comes to your next crow interaction.

With the same body to brain ratio as a chimpanzee, crows are no ordinary bird. Their brain functions are also equivalent to other apes and dolphins.

Crows often stay around the area that they were born. Unlike other birds, most crows don’t migrate during the winter. In a moderate climate like the Lower Mainland, crows stay all year round

Crow vs Raven: What’s the difference?

Crows and ravens are often mistaken for each other. Both species come from the same genius.

Ravens are the largest of the two birds. They have a wingspan of 114 centimetres.

Both ravens and crows have up to 250 different calls that they can make. A crow’s call is normally higher pitched then a raven’s.

Raven’s also have a thicker beak. When it comes to flying crows often flap while ravens soar.

Crows travel in larger groups, while ravens tend to travel in pairs.

A raven’s tail looks triangular, while a crows tail resembles a fan.