TIMELINE: The Life and Career of Hockey Hall of Famer, Hayley Wickenheiser 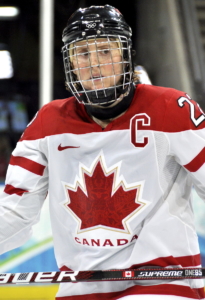 Women’s hockey legend Hayley Wickenheiser was one of six inductees to the Hockey Hall of Fame’s Class of 2019. The 41 year-old is often considered the greatest women’s hockey player, having made history multiple times in her 23-year hockey career. She racked seven world titles and four Olympic titles under her belt. She retired from hockey competition in 2017, where she is now simultaneously serving as the assistant director of the Toronto Maple Leafs, as well as attending medical school.

Wickenheiser started her competitive career in the National Women’s Hockey Team at age 15. Prior to the world stage, she made her mark playing in boys’ clubs until she began to compete on a national level. She went on to be a vital part of Team Canada’s most victorious moments– from olympic medals and world titles. When she exited competition in 2017, she caps off an outstanding career scoring 379 points in 276 games.