Back in the saddle

Back in the Saddle

Carla Webb worked as a police officer in Vancouver’s downtown east side for thirteen years. After witnessing the devastating affects of drug addiction, she was determined to find another way to make a difference.

Not only did she want to prevent people from falling prey to the grip of addiction but she also wanted to educate and encourage young people to make healthy choices in their lives.

Carla, along with her partner Steve Kennedy, they now run the Anam Cara Farm and Learning Center.

She follows the dynamics of horse herds to model healthy leadership skills, primarily in young girls.

Carla has partnered with horses for over forty years. She has extensive knowledge in reining and horsemanship.
She previously worked in the counter terrorism unit with the Vancouver Police Department (Sean Holden / BCIT News) 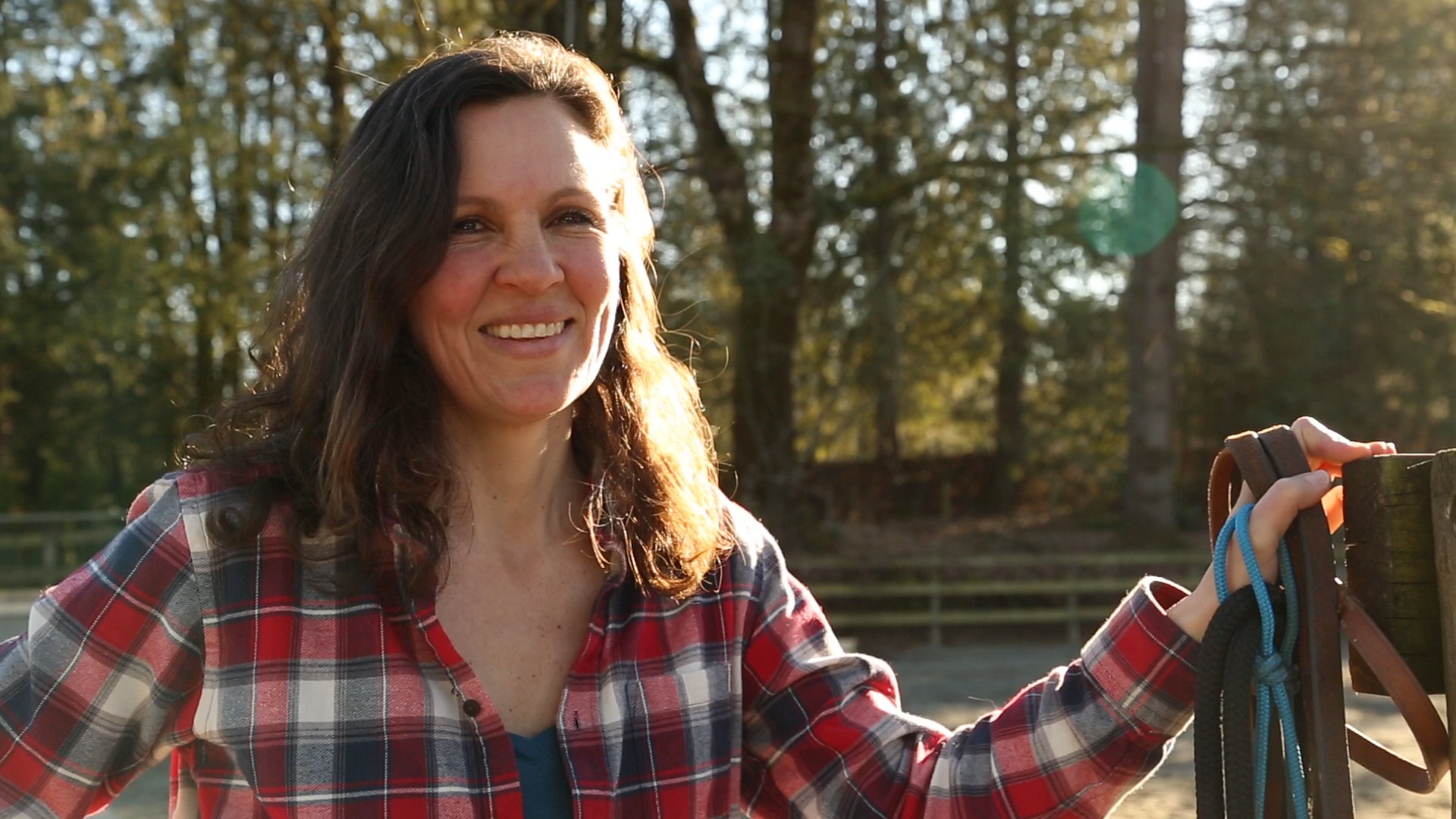 Spanning four decades, Carla’s experience with horses translates into improving relationships between people through horse therapy. Carla exemplifies the leadership and strength she teaches people as head horse at the ranch.

“I had a proposal to do a similar thing to what I’m doing now with the mounted squad. Marrying my love for horses and the people in the Downtown Eastside. This was my last attempt to find fulfillment” 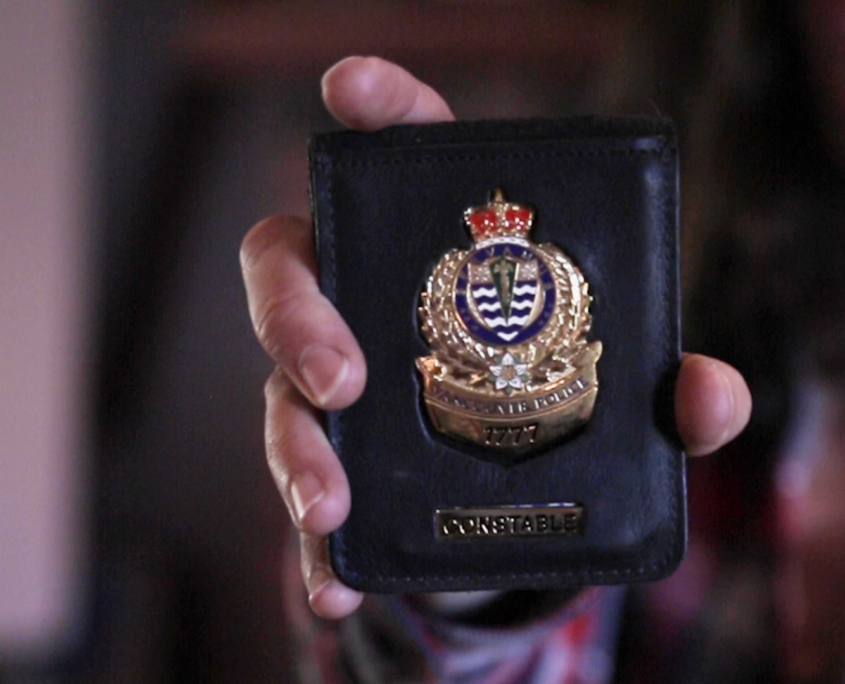 To Serve and Respect

When seeing Carla’s day to day it becomes clear that while she may not be in uniform, her principled nature of service extends to the farthest reaches of the ranch and its residents.

She’s early to rise because the animals need breakfast. You can hear Rudy, the resident rooster before the sun even crests over the mountains. She opens the barn to reveal the whole gang: Pigs, chickens, sheep, ponies and the horses, of course.

They all have different needs but all look to Carla for food and care. They perk right up, like the coffee heating up in the kitchen.

The pigs squeal for slop, the hens preemptively peck at the first sight of seed but the horses have a different tone. They seem to greet her and show affection before Carla shows the hay. They whinny and romp as they’re led out of the barn. Perhaps to stretch, perhaps for sheer joy. Carla seems most in her element as she prepares the horses for clients as the day soldiers on.

As Carla cleans the pens and feeds her flock she makes a point of saying that she is “typically the one person who carries the weight and responsibilities” of the animals. She said it in a way that underscores the importance of doing it right but also as point of pride that she seems quite pleased with. She treats it as a real feather in her cap, although it may have come from Rudy the reveling rooster.

Whatever the case, she wears a positive outlook, which is an essential part of the care for her clients and herself. All parties seek the help of horses to improve their lives.

The stage is set, the horses are ready and the first client comes up the driveway. It’s a family with two young girls. The youngest is full of pep and the older one is a bit more reserved. They are no strangers to farms, having moved from Northern BC recently. The oldest daughter, Penelope, is here for her trauma therapy. This therapy session is quite different.

Carla has a degree in psychology but this session doesn’t have any of the traditional trappings of therapy. There’s no chairs, no office, no leather couch. Front and center is the relationship between a girl and a horse. Carla says that “horses represent the epitome of softness and strength,” which allows them to resonate with people who are dealing with stress, anxiety and trauma.

Penelope is six.  She was fairly quiet and withdrawn. But as soon as Carla brought out her horse, she started to feel more comfortable. Carla said that it’s not just about riding the horses but living in the moment in the way horses do.

It starts with brushing their mane and cleaning the horses shoes. It establishes a connection with something so much mightier, yet so much calmer. Soon after the girl stated talking about what she likes, what she’s intrigued by and what makes her happy.

We spoke with Penelope’s mother, Judith, about what brought them to seek horse therapy with Carla. As it turns out, Penelope, had been witness to a horrifying accident that happened to her father. He was using an auger to dig fence post holes and was also putting up chicken wire fencing. While he was working, the auger snagged the chicken wire, pulled him into the hole and drilled into his legs.

Judith rushed to his aid and put a tourniquet on to slow the bleeding. He ended up in hospital for months and nearly died. Penelope couldn’t bare to see her father like that. She became closed off and distant. It was slow going, but she began to feel more like a kid again with the help of Carla and the horses. 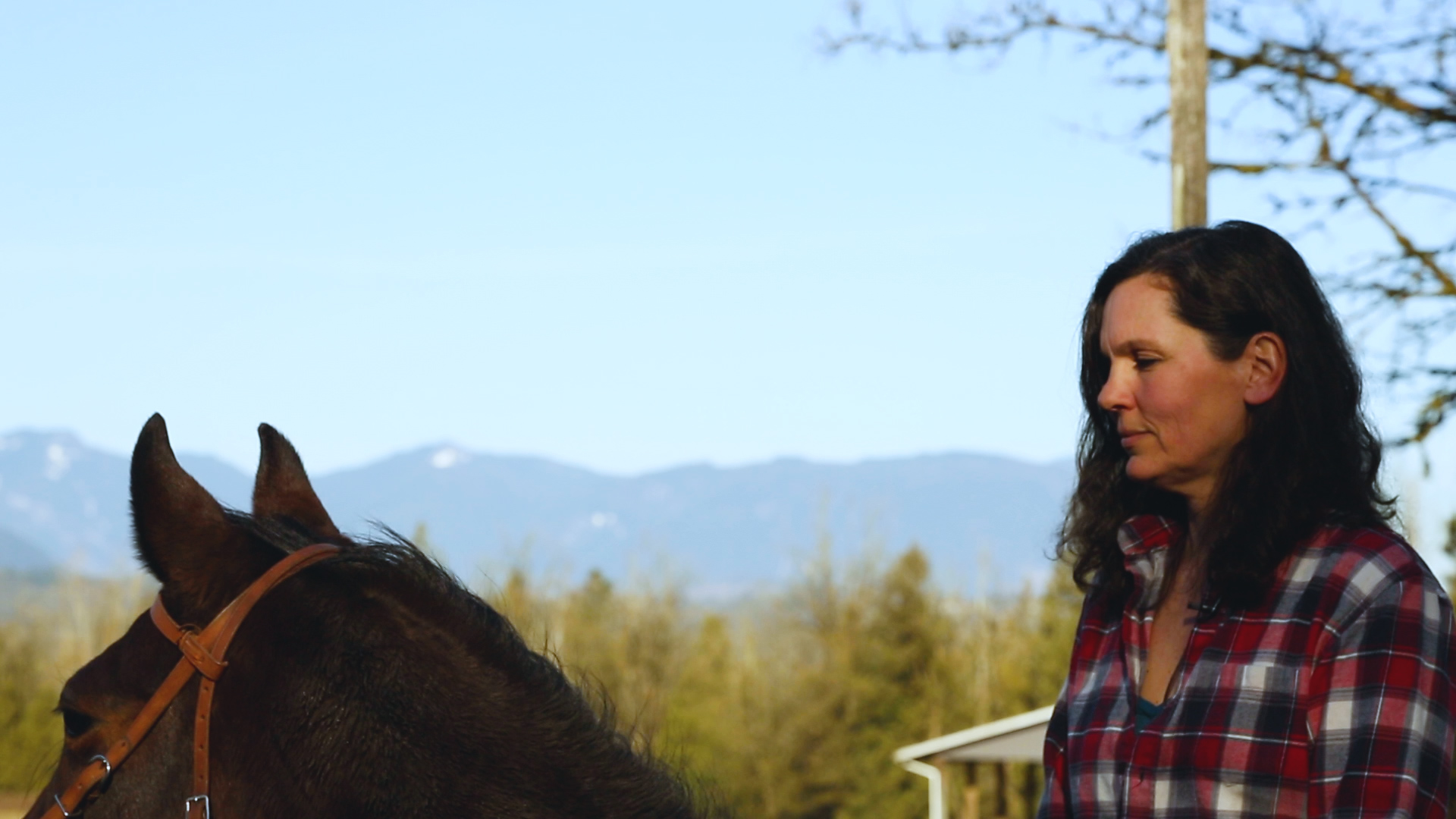 We took a closer look at how the barn and its other residents were getting on. There were Kune Kune pigs which were a critically endangered species of New Zealand boar that Clara was able to adopt and are now doing quite well.

The three sheep were a small but fluffy flock that were eager to relax on the hills behind the barn. They were never more than a few feet apart from one another.

The chicken’s were quite a lively bunch. It was eight chickens and Rudy the rooster who rules the roost. This golden boy was fiercely protective of his hens and even bruised our cameraman when we got too close.

There were also two rescue ponies that were adorable and about the size of a large dog. They weren’t as docile as they looked, though. One bit us while were shooting and the other was real eager to be let out of his pen.

The stars of the show were the horses, particularly one stunning stallion named Bart. He was a super curious about everything, always had his face poking out from his pen to look at what was going on.

However, Carla and her partner Steve weren’t the only caretakers of the herd. Tracy Bisser is an emergency nurse at Vancouver General hospital who is Bart’s primary caretaker and comes to the ranch almost daily for her own therapy and mental health.

There was also a dynamic duo of furry ranch hands, Zora the dog and Batman the cat, who were always watching the other animals and were quite attuned to the schedule of the day.

Calra has a series of clients, most of whom are young children between the ages of 5 and 10. Many come to the ranch as a form of therapy for various concerns but instead of sitting on a couch, they sit on a horse. It is the interaction between client and horse that Carla says, “is amazing and I don’t think many people understand how much of an affect it can have.”

Horse therapy is a form of treatment that can have a positive impact on people’s lives and bypassing a crucial problem in traditional therapy. For some of Carla’s clients, they can’t tell her what’s wrong. One of her client’s, Charlie, is exceedingly energetic, curious and daring. However, he has low-functioning autism and is non-verbal.

charlie’s mother, Melissa Crowhurst, spoke about how she sees her son on the horse and watches his focus tighten and how it calms him so effectively. As Charlie bonds with Carla and her horse May Charlie’s assistance dog, King watches on. During Charlie’s session King became visibly upset because he couldn’t be near his master. Even though the ranch serves to show how animals can have an affect on us, King was quite the example of the affect we can have on animals.

Judith De-Neit lived with her husband and two daughters Penelope and Edi in Northern B.C.

They now live in Vancouver and made the journey because of an accident that happened on their farm that deeply affected their eldest daughter and her father.

Carla is branching out into helping provide hippotherapy / animal therapy for first responders in the Lower Mainland.

this new initiative is the revisiting of the spark that she attempted to start during her time as a police officer.

Now, she’s finally getting the chance to fulfill the project that was taken from her years ago, but with a first-responder twist.

Tracy Visser comes to visit Bart everyday. As an emergency room nurse, Tracy deals with stress through the work. The Standing Six program is a coping mechanism for her. ( Michael Beck / BCIT News) 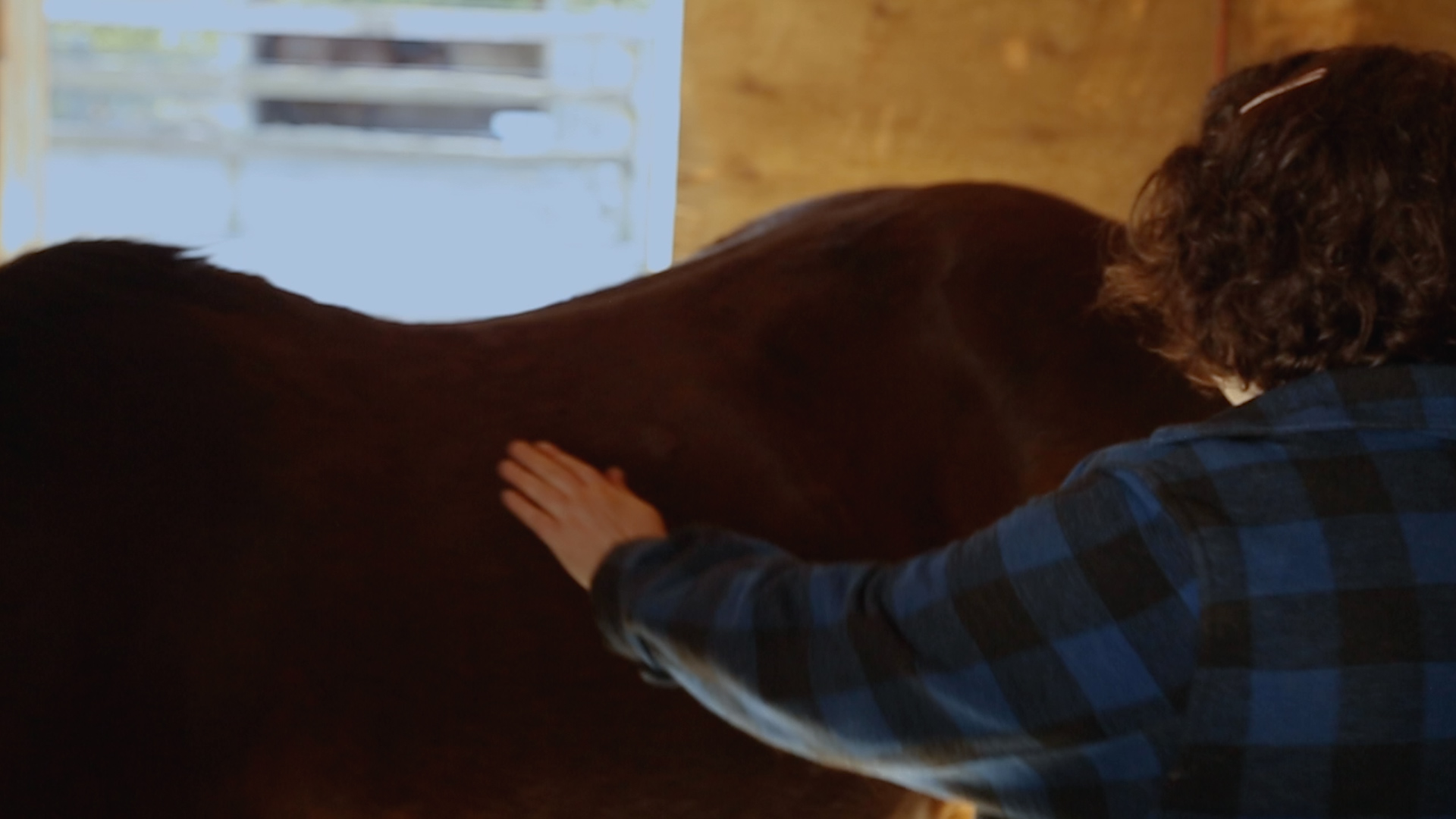 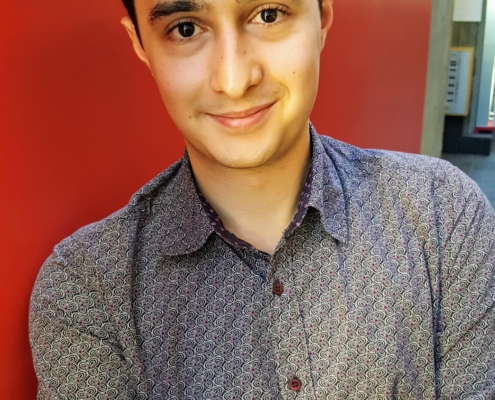 Kareem Gouda is a journalist who thinks local news is super underrated.

“If I’m watching the local news and they can’t tell me why my garbage isn’t being picked up, then what’s the point?” 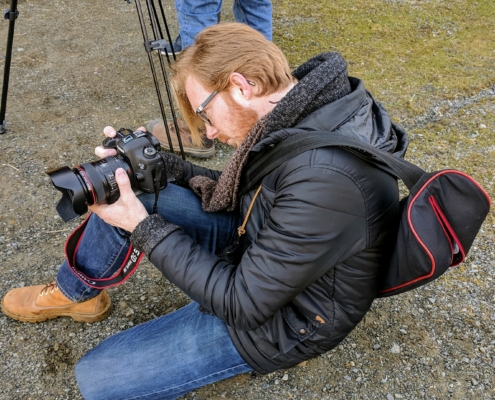 Sean Holden is a journalist and documentarian with a passion for producing, filming and editing.

“If it has heart and I feel I can do the story justice, I’ll be there with a camera.” 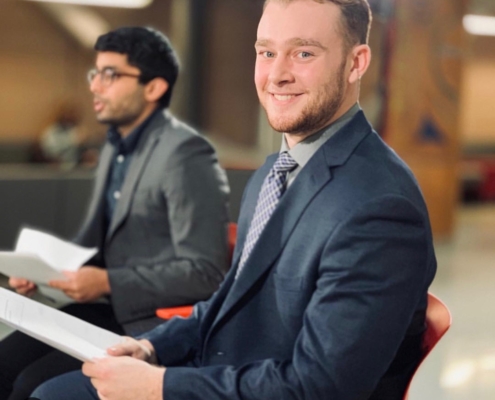 Michael Beck is a former athlete and aspiring sports journalist.

“With a little bit of effort, you can achieve anything.” 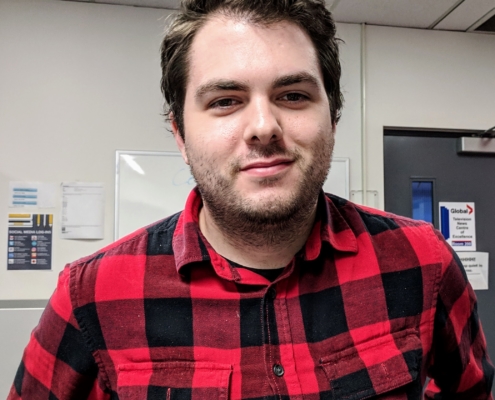 1
Jeff Malo is an aspiring multi media journalist who is passionate about video production and editing.

This documentary was the final group project during our time at BCIT’s broadcast and online journalism program. Our team is Michael Beck, Jeff Malo,  Sean Holden and Kareem Gouda.

The principle photography was shot at Anam Cara Farm and Learning Center. During our time there we observed how the farm runs and how Carla treats her clients and animals.

Jeff Malo is supurb with after effects. Michael Beck is an exquisite shooter. Sean Holden is an awesome editor. Kareem Gouda is a web-editing whiz.