Click through the Timeline below to see the history of pinball!

As you can probably imagine, pinball machines aren’t necessarily the most common thing to find around town. Classic arcades typically feature some pinball machines, and there are even some at some local pubs and bars. Roberts two favourite places to go are 12 Kings and The Lamplighter.

However Robert isn’t always to get to either of those places, so how does he practice pinball? The Gagno’s garage is fully loaded with 10 pinball machine so Robert can practice anytime he’d like. They even have more machines in their house, for a total of over 16 fully built pinball machines.

Check out the video on the right to take a look at what it’s like inside Roberts pinball emporium.

What’s in a Pinball Machine? 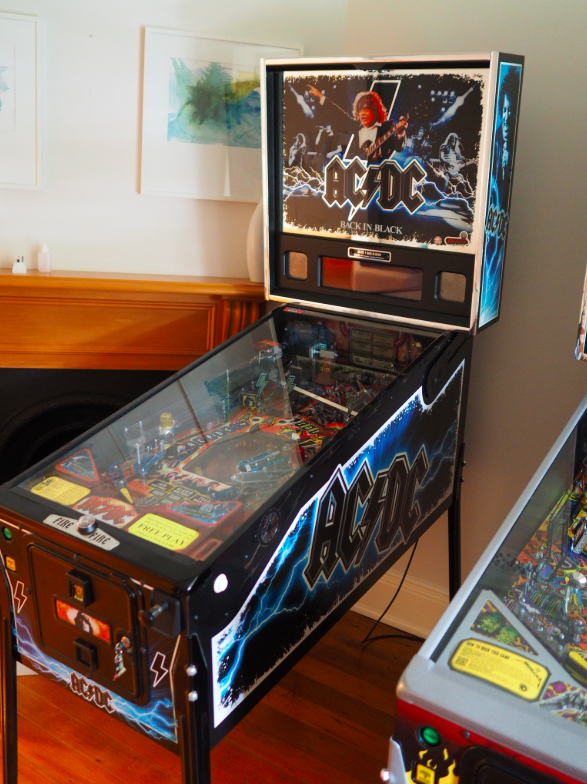 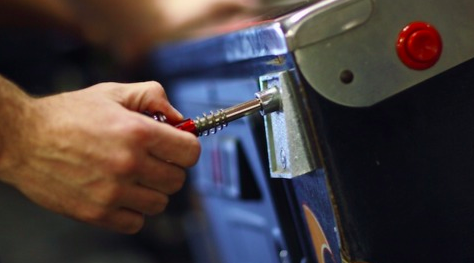 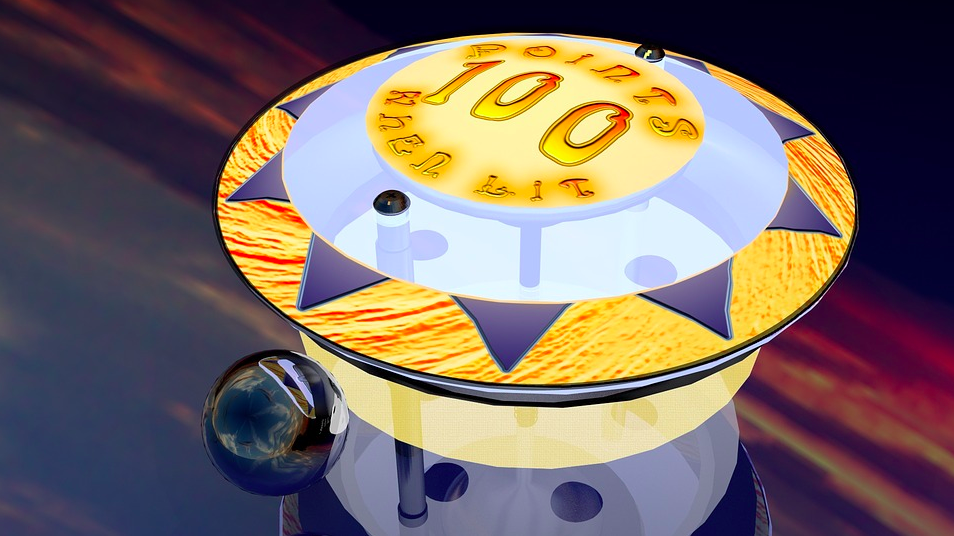 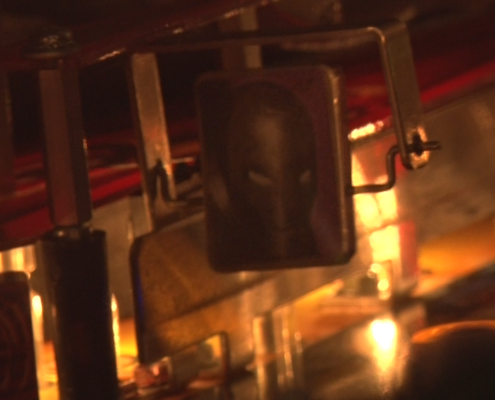 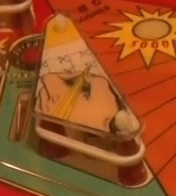 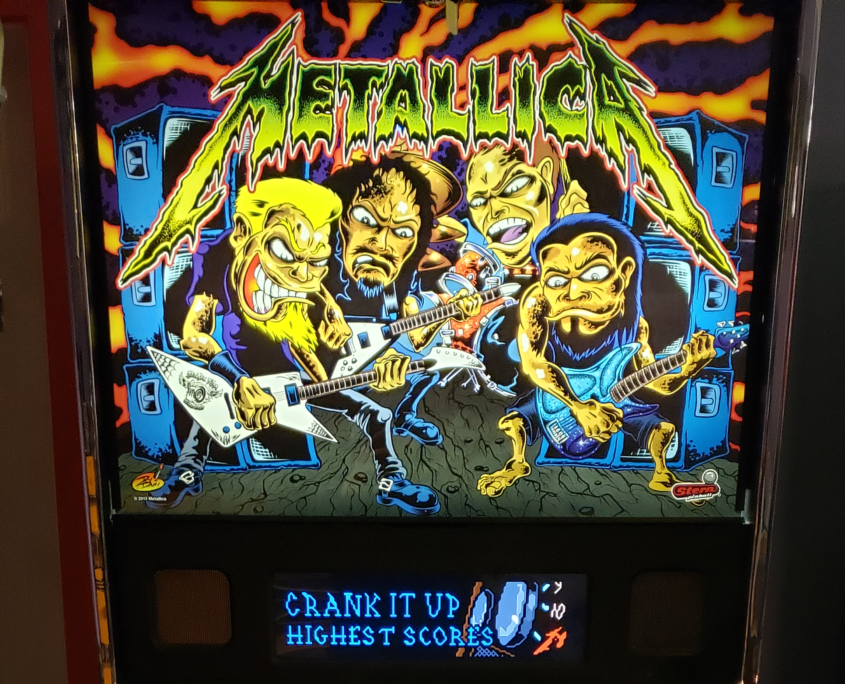 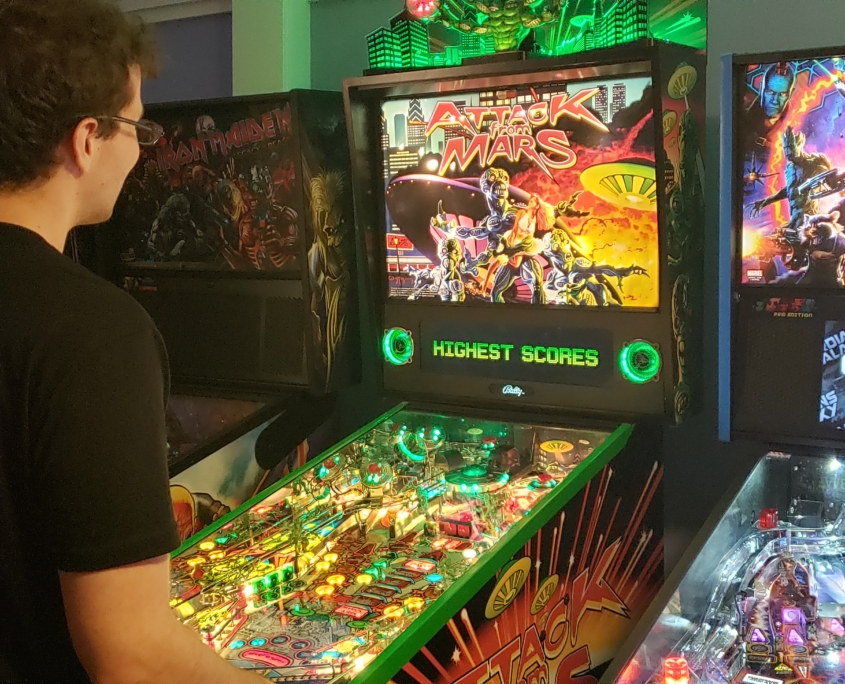 The Flippers are arguably the most important part of a pinball machine. They are the little arms that sling the ball up into the playing field. The Flippers are controlled on both sides by the player hitting a button on the side of the machine.

The Plunger is what starts the entire game. The Plunger sits on the right side of the machine and slings the ball into action to start the game from a spring loaded rod once the players has pulled and released the Plunger. Depending on how hard the Plunger is pulled before it’s released, the speed of the ball traveling into the playing field will vary.

Bumpers are the typically round bulge sticking out of the playing field, which launches your ball in the opposite direction. Depending on which machine you’re playing on, the locations of the Bumpers on the machine will change. Most machines haves a lot of Bumpers up top so that the ball hits them almost immediately upon entering the field of play.

Spinners are a bonus scoring feature in the game, and the game can actually be played without them. They are typically placed at the start of a ramp, and spin emphatically once a ball rolls underneath one. The picture placed on the Spinner is all dependent on the theme of the game.

Ramps are exactly what they sound like – Ramps. A player can launch their ball up the Ramps for the player to trigger bonus points, or even enter another raised playing field. It’s at the start of a Ramp where a spinner lays, acting as a target for the player.

The Backbox in short is the score tracker, accompanied by pictures that vary depending on the theme of the machine. The screen on the Backboxes are used to track high scores, ball counts, or notifies a play for ‘Game Over’. Backboxes usually feature on to three screens on them, with speakers for the game’s volume on some machines as well. Animations will play on the screen, those animations also vary depending on what the machines theme is.

The Theme of the machine is what truly makes every different machine unique. The Theme changes what picture appears on the spinner, which animations are displayed on screen, what picture will be used on the backbox, and everything in between. Themes are typically centered around movies or music, like Lord of the Rings, Dirty Harry, Attack from Mars, and Iron Maiden. Once a machine is built, they are unable to change the Theme, due to how much of the Theme goes into every single working piece in the playing field. 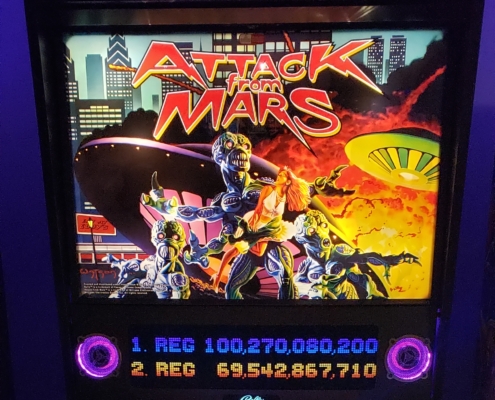 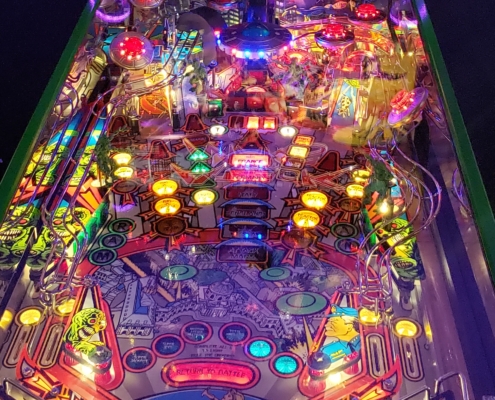 Attack from Mars – Robert’s favorite game is a pinball machine created in 1995 by game developer Midway. The game was conceptualized by legendary designer and programmer Brian Eddy. In this game, Martians invade Earth, and it is up to the player to destroy the Martian fleet, save all the major cities, and then head off to Mars to destroy the Martian empire and planet Mars. Robert states that the dancing martian figures are what makes this game his favorite and this is the machine in which he won the 2016 World Championship. 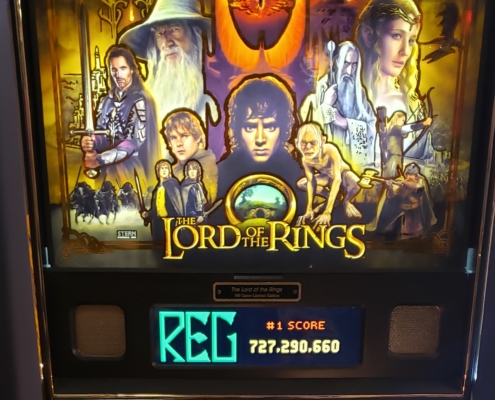 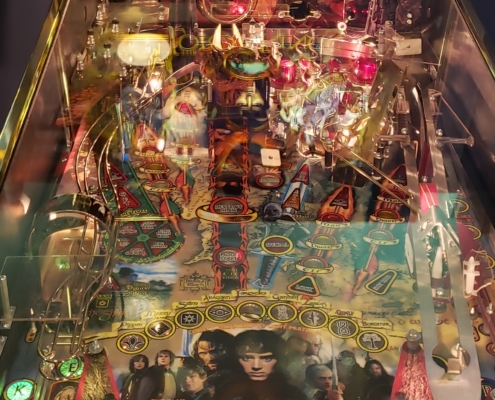 Lord Of The Rings – is a pinball machine game designed by George Gomez in 2003. The game is distributed by Stern Pinball. It is based on the The Lord of the Rings film trilogy, which was first released in 2001. It features the highest possible score multiplier in pinball to date which Robert has used multiple times to score in the billions. He says the thing he loves the most about this game is the music and soundtrack which “is just the most beautiful.” 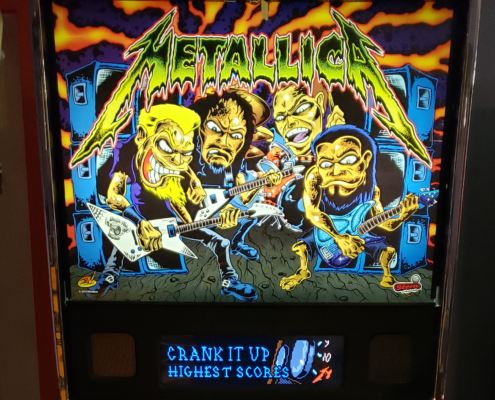 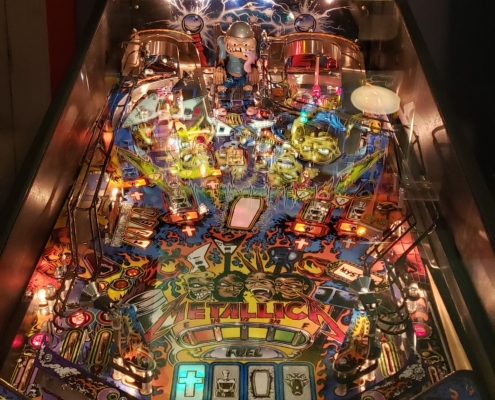 Metallica – this pinball game was designed in 2013 and distributed by Stern pinball. This homage to the rock band Metallica has already become a favorite in Robert’s game room. The machine features 12 classic tracks from the legendary group that he says is essential in keeping up the energy to play the game. The gameplay is what draws him to the game the most, “Combos, it’s definitely combos, this game is all about combo-ing”. 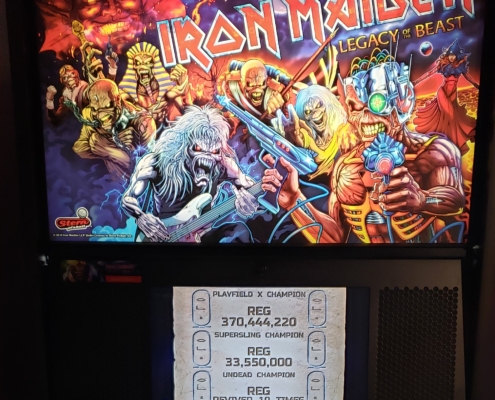 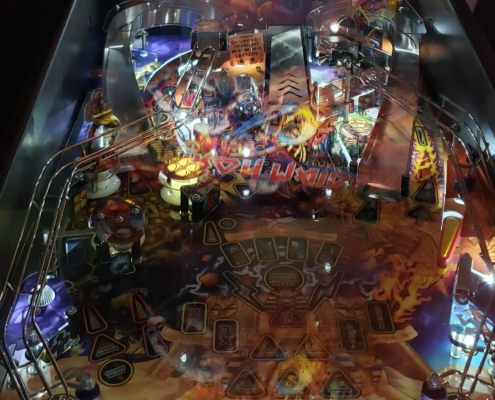 Iron Maiden – the newest edition to Robert’s collection is another game based on a historic rock band. The Iron Maiden machine was designed and created last year by Stern Pinball. His favorite aspect of the game is not the gameplay but the beautiful artwork that drapes the cabinet. 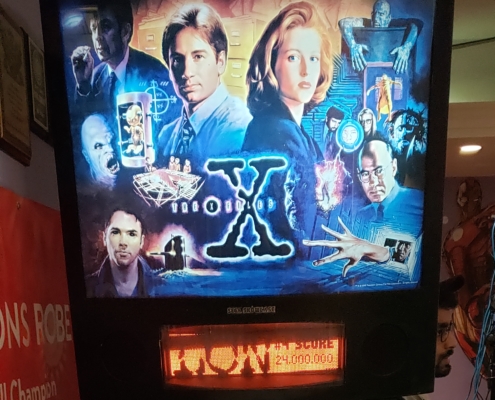 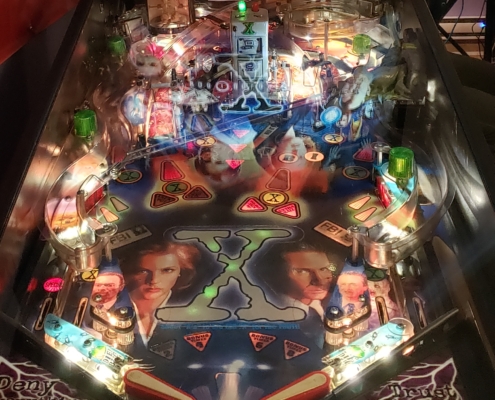 X-Files –  Nearly two decades old and considered a classic, the X-Files machine made by Sega is based on the hit Fox television series. Robert loves the cabinet of this machine because he is a big fan of the show, “You know what’s sweet about this game? The cabinet.” 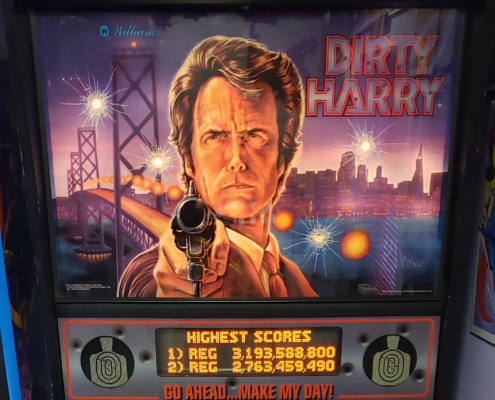 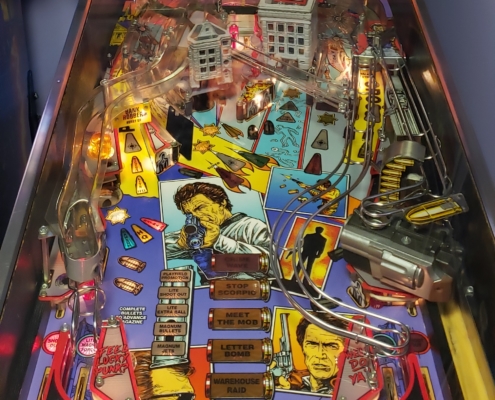 Dirty Harry – The gun plunger that shoots the ball into play is the most distinguishable element of this pinball machine. It is also Robert’s most beloved characteristic of the game. It is based on the Clint Eastwood character and was released in 1995. Robert loves to shoot pinballs at targets, sinkholes, ramps, magnets in through loops the same Dirty Harry shoots at bad guys.

Who are the other 11 players?

A look into Visual Stimulation

“Folks on the spectrum tend to be specialist rather than generalist. They tend to have fairly narrow range of interests and very deep interest in those areas. Whereas most of us have quite broad interests. Individuals on the spectrum tend to zero in on a much narrower range. And if you put a lot of time and energy and attention into a narrow range of interests, you get very good at it. If you look across all sorts of different fields of endeavor, it takes about 10,000 hours to master something to be at the top of your game.” – Dr. Glen Davies, Co-Director of Autism Integrated Medical Services at the Pacific Autism Family Network.

Dr. Davies says the dopamine rush Robert receives from the hit of pinball is good, however too much could be an issue.

“We can look at maybe on a video screen or it may be pressing the button on the pinball machine. That response, then you get a win, right? And that little win is the reward of the reinforcement for the response. And it’s a release of a little bit of a neurotransmitter called dopamine. And, and so it’s a little hit, a little pleasure that you feel. Again, the frequency that someone is getting a little pleasurable hint in a video game or pinball game was really frequent, right? That sort of built the mean, the circuit in the brain is involved in, in nearly all addictive behavior, including stuff like gambling or substance use. Now, substance use brings other things to the party, but, there’s a bit of a dopamine you get in each of the, those behaviors that kind of get out of control for us. In the area of autism intervention, we are generally recommend me, but that parents kind of rash him the amount of time kids do video gaming or pursue a little pleasure like that. He’s an adult and pursuing his own interest here. And again, we try to help shape kids into a more balanced direction when they’re younger, when they’re older, you know, they’re really pursuing their own agenda more. But we have to look at if somebody is spending most of their waking hours are the hours that they may be working, doing other endeavors. I don’t know if Robert Works outside of the home or not, but it can displace a lot of other activities that are important for people to do – and skills for them to develop.” 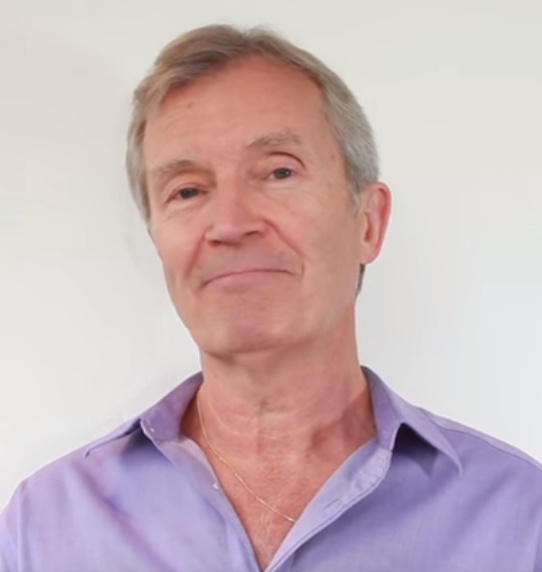 “The visual channel is usually the strongest channel for folks on the spectrum. Part of that reason is auditory and verbal channel is less of a draw, less skilled, often for them. They play to their strengths the way all of us do. And in the process, what starts sewed his initial strength and initial potential, they can turn into something that’s in some ways superhuman, beyond what other people can accomplish.”

Listen to the full interview below. 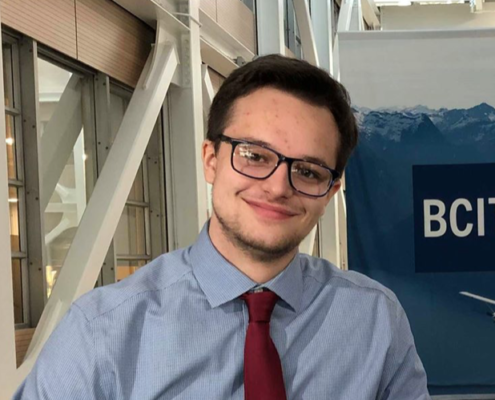 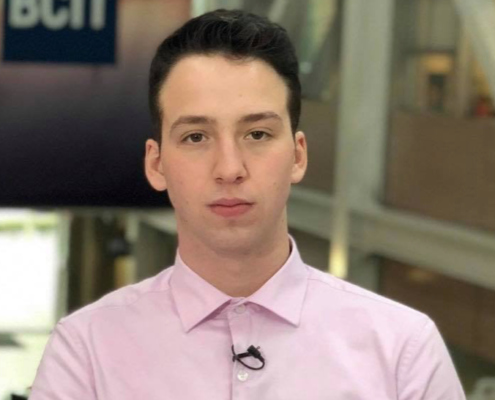 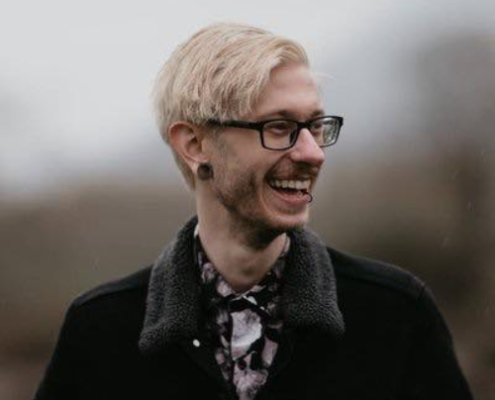 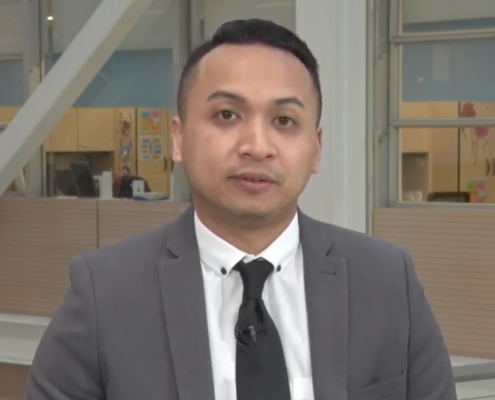 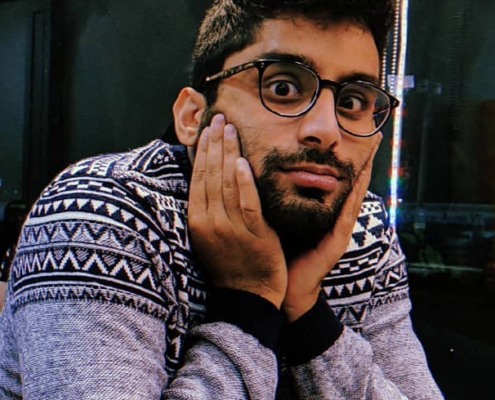