The shame of it Aalst: A Flemish town puts antisemitism on parade

It was a rainy Sunday afternoon somewhere in Flanders. I was on a train bound for Aalst.

I’d read an article on a Dutch news website leading up to carnival season that the Flemish market town had asked to be taken off a UNESCO list of world cultural events after last year’s carnival triggered widespread accusations of anti-Semitism.

Pictured was a carnival float (‘the float’ hereafter) featuring obscene caricatures of caftan Jews lording over a pile of money. This was full-frontal Jew-hatred, or so I thought.

Apparently, so did Israeli foreign minister, Israel Katz. He Tweeted last week that, “Belgium as a western democracy should be ashamed to allow such a vitriolic anti-Semitic display,” calling on local authorities to, “condemn and ban this hateful parade in Aalst.”

But many in Aalst were outraged even at the suggestion that the float was motivated by anti-Semitism. After all, carnival is about pushing boundaries and throwing off social taboos. Basically, it’s a huge ‘f-you,’ to bourgeois political correctness.

Needless to say, I didn’t buy it. And when I read that more of these displays were planned for this year’s carnival, I slacked my editor, “Is anyone assigned to this, and can I pls shadow them?”

Putting the ‘ant’ back into anti-Semitism

11 men at this year’s Aalst Carnival dressed up as the insect embodiment of Orthodox Jews. The text in quotations reads, “the Complaining Ants,” which the men explained was a pun on the Dutch word for wall. As in, ‘wailing wall.’ 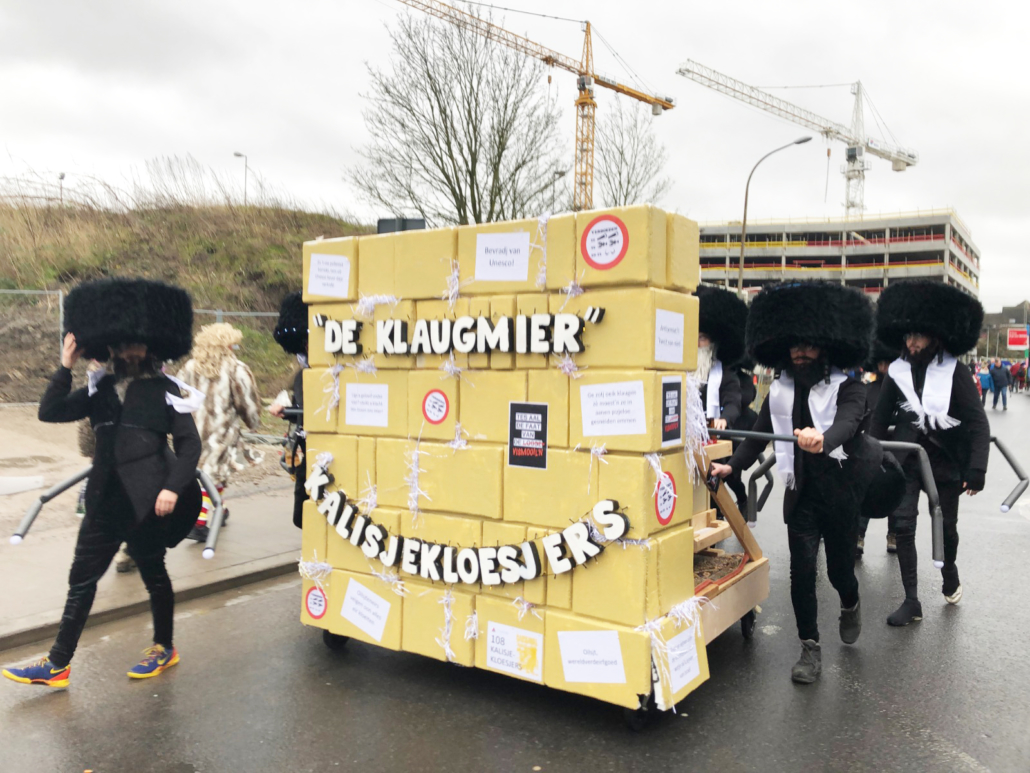 Belgium as a Western Democracy should be ashamed to allow such a vitriolic antisemitic display. I call upon the authorities there to condemn and ban this hateful parade in Aalst. pic.twitter.com/3TId7ZveOT

“I hope you’re not here for the Jews.” – Aaron Christien, Aalst resident & Carnival-goer

24-year old Aaron Christien says Aalst is “a cultural city,” and that this year’s floats featuring caricatures of Jews are not antisemitic.
(Laurie Tritschler / bcitnews.com) 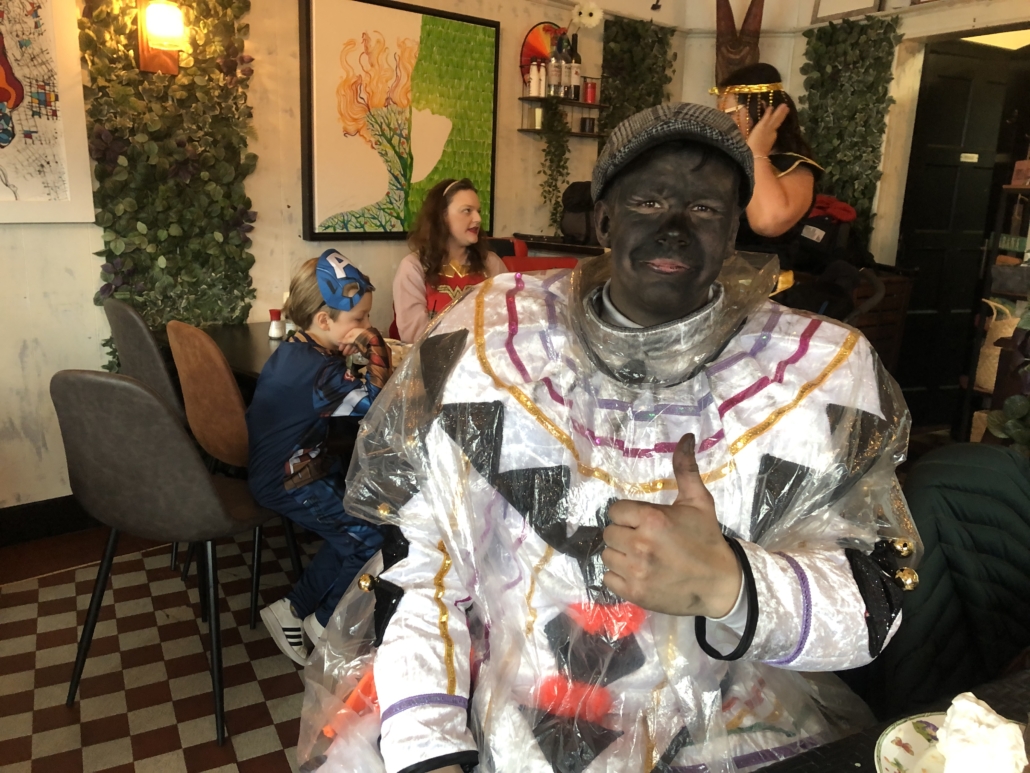 Fast forward to Sunday, and my colleague, Eddy Wax, and I have found ourselves a carnival-goer who’s eager to give us the straight dope on the Aalst cultural scene. “I hope you’re not here for the Jews,” he says after we tell him we’re journalists from Brussels.

We’re in a crowded pub near the town square, and the atmosphere is convivial as the parade gets underway. Our guide is a local factory-worker named Aaron, after “the brother of Moses,” he laughs. Aaron is dressed as a clown, his face blacked up, he says, to conceal his identity behind his carnival mask. It’s not racist: It’s an aesthetic.

Aaron is deeply hurt by the negative attention swirling around his beloved carnival. “Everyone is welcome here,” he insists, launching into a principled defence of last year’s Jew-float.

I should point out here that I’m hardly an expert when it comes to things carnival. And, my understanding of Sunday’s events is blunted by my combined inability to speak Aalst dialect and my ignorance of Flemish culture, more broadly. For his part, Aaron is speaking in broken English. He’s also drunk. The same goes for the young men dressed as Jewish ants Eddy and I’d met on our way to the bar.

The men were pushing a paper maché brick wall they said represented the Wailing Wall in Jerusalem, where Jews have gathered to pray since time immemorial. Queue some not-so-fancy word play, and it turns out the whole charade was supposed to be a play on the Dutch word, mur, meaning ‘wall,’ the Aalst dialect for ‘ant’ (mier), and Israel’s ongoing occupation of Palestine. Here were pretend-Jews marching in would-be indignation, like so many metaphorical ants, to complain at their ‘crying wall’ about antisemitism while the Jewish State clinches its hold on occupied Palestine.

It still looks terrible. Even the pun isn’t funny.

When a black-faced clown tells you, ‘it’s not racist’

Nazi propaganda shows a Jewish trader outside a stock exchange, sitting on a huge bag of gold.

The text reads: “The God of the Jews is money. To earn money, he commits the greatest crimes. He won’t rest until he can lie on top of a big sack of money, until he has become the King of Money.”
(Holocaust Research Project) 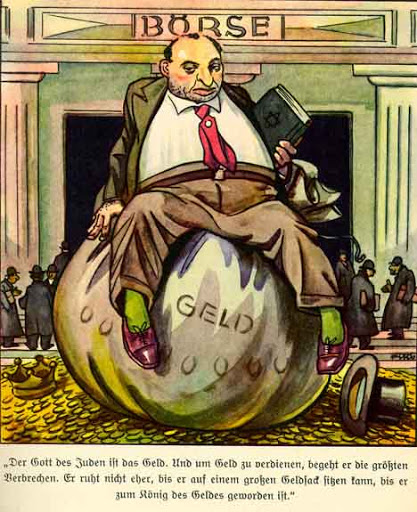 A float that appeared in this year’s Aalst Carnival showed a rabbi sitting on a busted safe overbrimming with diamonds and gold. 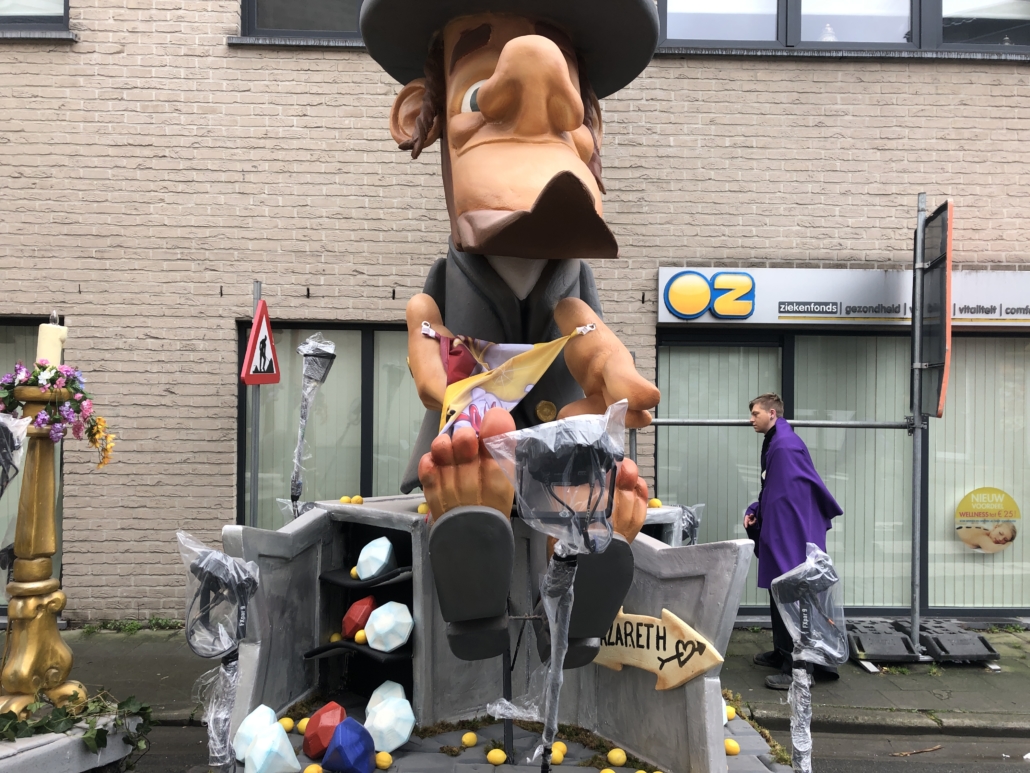 This brings us back to the pub, where Aaron parks his tumbler of Amaretto at a table next to mine and Eddy’s. He isn’t here with the ant-Jews, and though he’s been part of the parade for some time, he says he wasn’t involved with last year’s money-grubbing Jew-float. He says there are lines that shouldn’t be crossed—even at carnival. Floats bearing Nazi swastikas or mocking the Holocaust would be going too far, he points out. He’s calm and affable, even when Eddy and I challenge his assumptions about anti-Semitism.

He says the float had been on what carnival-insiders call a “Sabbath Year” in 2019. It’s a time when teams scale back on their float productions in order to save money for the next year’s carnival. The joke, Aaron says, was that the offending team was being, shall we say, ‘careful with their money.’

But for all the social context, and for all that’s lost in translation, Aaron’s defence is to argue in circles. Here’s a brief rundown of our conversation.

Isn’t it dangerous to publicly flaunt these kinds of Jewish stereotypes?

No. The team was on a Sabbath Year. It wasn’t anti-Semitic—the float had nothing do to with the Holocaust. Plus, it’s carnival.

And, what about portraying Jews as actual vermin? That was done in the lead up to the Holocaust, which killed 6.5 million Jews over Europe, and we just saw that here in Aalst.

It’s a joke. This is carnival. Everyone is welcome. And, if you want to talk about harm done, what about what Israel is doing to the Palestinians?

What does that have to do with carnival?

Well, we’re not a racist city. It’s just that if someone tell us we can’t make fun of something, then we’ll just keep doing it. I hope you can see past some of the displays which might be in poor taste. But, there’s nothing anti-Semitic about it.

Eventually, the three of us agree to disagree, and Aaron excuses himself from the table.

“It’s like he’s trying to throw up a liberal justification for hate speech,” Eddy chuckles. Eddy is Jewish, and it’s been a frustrating day for him.

I don’t blame him: We’ve just been lectured to by a clown who doesn’t think it’s racist to publicly masquerade in full blackface. The day is still young and we’ve already met dozens of people in the parade chorus dressed as appalling caricatures of Hasidic Jews. Their costumes are homemade, replete with greasy beards and curled hair extensions made to look like the peyot worn by Orthodox Jewish men. Some are wearing Shylock noses. Slap that together with a drab overcoat and, hey! presto! they’ve basically replicated the ‘eternal Jew’ of Nazi propaganda.

POLITICO Europe’s Eddy Wax asks a man at Sunday’s Aalst Carnival if his Jew costume isn’t a bit much. 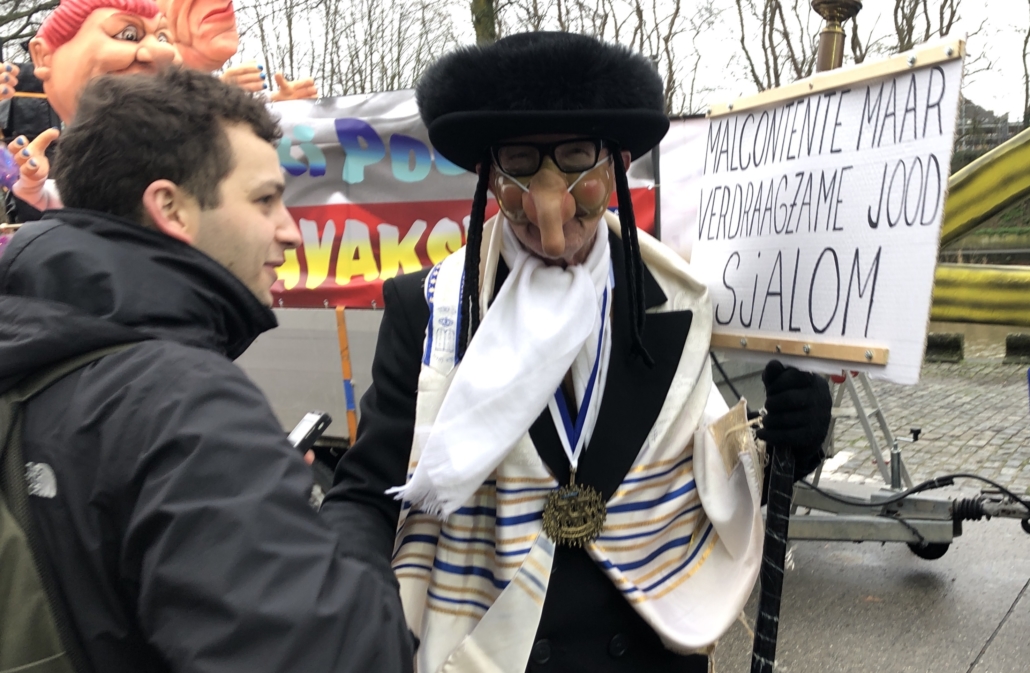 A symbol of peace? An overpass leading to the Carnival grounds in Aalst bears a Hindu swastika. The Nazi swastika was infamously rotated on its axis and was drawn sans dots. Still, though… 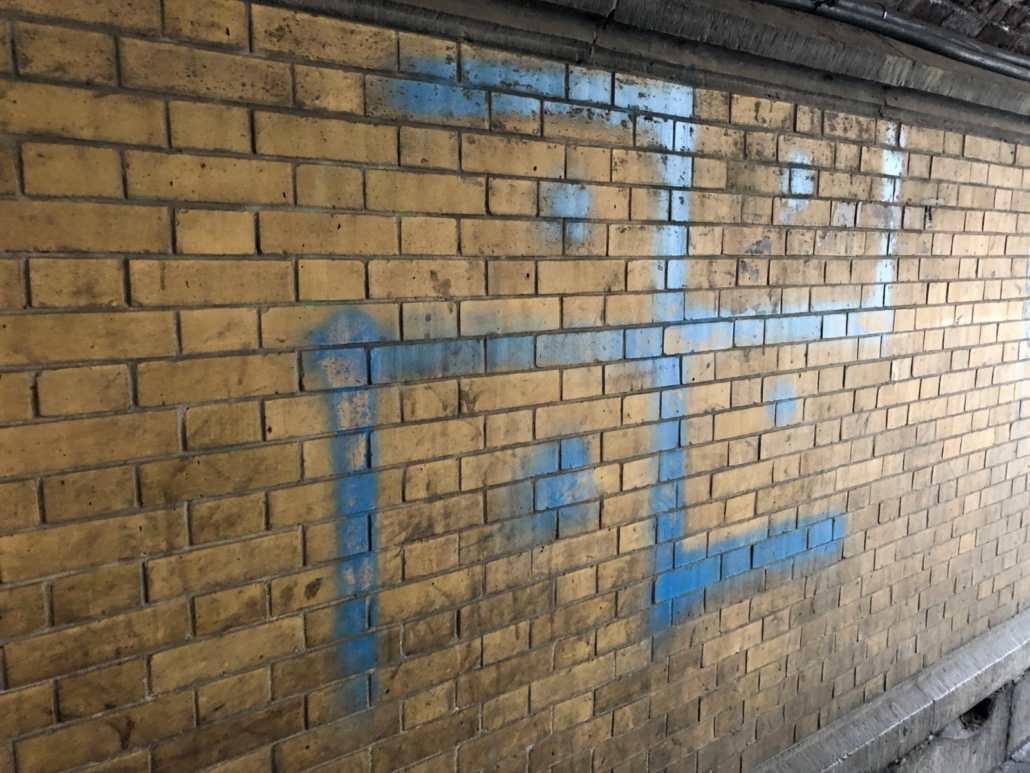 Aside from the ant-Jews, most of these outfits seem designed to flirt with, but not quiet touch these people’s narrow definition of anti-Semitism. Take the the Hindu Swastika someone’s spray-painted on a brick overpass on the way to the carnival ground. If it’s not making light of genocide, and it’s not endorsing National Socialism, then it can’t be anti-Semitic.

Jews weren’t the only historically persecuted out-group to be mocked at this year’s Aalst Carnival. There were Lion King-themed floats accompanied by racist ditties; an Aztec float trailed by an army of brightly coloured dancing warriors; one float just showed a hook-nosed Turk wearing a fez and flanked by menacing cobras, with a bundle of dynamite next to a sign pointing to “Mekka.”

A picture says a thousand words…

Yet, I’m willing to bet that most of the people Eddy and I met on Sunday weren’t consciously motivated by anti-Semitism—except for maybe the ant-Jews. Instead, I came away from Aalst feeling as though I’d watched thousands of fifth-graders who, scolded by teacher and inwardly burning with shame, doubled-down on the behaviour that first wound them up in trouble. But that doesn’t mean their shabby, appallingly vulgar performances weren’t anti-Semitic.

Meanwhile, the problem in reaching people like Aaron is that effect doesn’t necessarily follow from intent. You don’t have to want to harm someone for your actions to put them in harm’s way, any more than you have to wilfully embrace racism to say and do racist shit. As for the excuse that free speech gives anyone the right to make fun of everyone, human history has put paid to the quintessentially liberal dogma that, in a free market of ideas, it’s the good ideas that take root in the public sphere.

The thing about genocide is that it never kicks off in a vacuum. People have to learn to see their perceived enemies first as buffoonish and undesirable before they can look on these ‘others’ as truly sub-human. By normalising anti-Semitism, Aaslt Carnival leaves us in a place where we can reasonably expect a resurgence of the casual, slap-on-the-back racism relegated to social taboo in the wake of the Holocaust. From there, it’s doesn’t require a leap of the imagination to anticipate communal violence in the vein of last week’s shootings in Germany’s Hanau, where a white nationalist murdered 9 people of Turkish and middle eastern extraction.